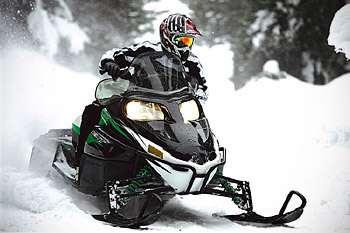 Clearly, Arctic Cat’s F-8 EXT is positioned on the same turf as the Apex XTX. While this 800 2-stroke deep snow runner is lighter than the Yamaha, it’s not in the league of either the Polaris Switchback Assault or Ski-Doo Renegade 4-TEC.

The engine is now a worthy competitor to both the Ski-Doo E-TEC 800 and the Polaris Liberty single injector CFI 800. What it doesn’t do well yet is deliver good fuel economy or reduced exhaust smoke.

Hopefully, these key consumer issues will have been addressed by the time we get our production 800s on the snow this winter.

The F-Chassis has been through many tweaks and updates since its arrival mid- decade. At first the chassis was predisposed to understeer, a trait usually not in Arctic Cat’s vocabulary. Re-engineering has brought the F-Chassis to a point where Cat can be proud of its handling and, in particular, it’s exceptional ride quality.

The floating front arm skid used in the EXT gets stretched to 144 inches from 128. In this application, the F appears to win on almost every front.

Clearly, the floating front arm design benefits from the extra length of longer rails. The sled can be drilled into whoops and it simply swallows and digests them with ease. The double A-arm design up front is extremely capable at leveling moguls and keeps the skis in constant contact with white top in heavily moguled turns.

Sounds like a win-win deal, right? Mostly. Here’s where we get on our 144 versus 136-inch soapbox. On groomed hardpack with good carbides, initial turn-in is linear and predictable. However, if there’s an inch or two of fresh snow on top of hardpack you’ll notice a slight tendency for the sled to push and go to the outside (understeer). While this quality is easy to counter with a stab on the brake or dropping some throttle, it is evident.

What we like most about IRP is juggling the ergos on a long ride, allowing legs to stretch and your back to rest while continuing to rail turns, bumps and varying terrain. This is just too good of an idea.

The EXT F-800 is a big sled and lightness has never been its calling card. In this 144-inch variation, the 800 EXT produces exceptional ride quality along with the ability to lift its nose on a snow-covered lake and haul booty past the C-note with measurable authority.

Simply put, the F-800 EXT hauls in deep snow and handles bumps better than a 128 F. What this platform does not do well is deep snow boondocking or freeriding.

It’s simply too much sled with ergonomics predisposed to trail duty to capably answer the freerider’s more tightly skewed demands.