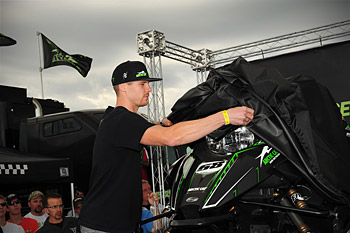 Hay Days kicked the 2013 snowmobile season into gear this past weekend in North Branch Minnesota. Amidst the mayhem, Arctic Cat – along with the capable hands of Tucker himself, pulled the sheets of an F 800 Tucker Hibbert Race Replica sled and announced a contest you’ll want to be a part of.

Cat has partnered with Supertrax Magazine and SnowTrax Television this season to give away an F 800 Tucker Hibbert Race Replica sled boasting serial #2 to a lucky winner.

How do you qualify? Simple. You can find a ballot card in your latest issue of Supertrax Magazine or even easier – CLICK HERE and download a printable PDF of the very same ballot card.

Once filled out, get down to your local Arctic Cat dealer and drop your entry card into the contest box he’ll have prominently displayed and that’s it. You’re entered!

As if a new sled wasn’t awesome enough, the winner will also receive an all-expenses paid trip to Arctic Cat’s hometown Thief River Falls, MN to ride with Tucker himself along with the crew from SnowTrax Television to be featured on a future segment of the show!