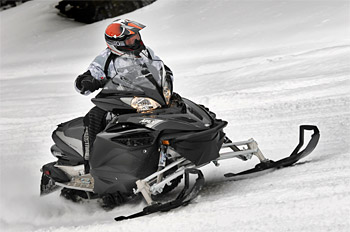 This BIC is specifically about power. No use trying to rationalize this award with Kent’s goofy: “Yeah, but it doesn’t handle like the new Cat” argument.

This isn’t about weight. If it was, we’d be talking about the Rotax 4-TEC 1200. The Apex mill spins four rods and four pistons. It’s big, okay Kenny?

Get this straight in your melon: The award is for the best 4-stroke powered sled in the biz. Clearly, the Apex’ 5-valve, 4-cylinder, jackshaft driven, fuel injected, EXXUP controlled exhaust valved, harmonious reactor cast from exotic metals has no equal in the sno-mo-biz.

This 4-stroke produces gobs of unending low-rev grunt that crescendos at a 10,800 rpm shift-speed, 160-plus-hp banshee-wail capable of uniting our collective gearhead hearts in a near hypnotic, drooling epiphany.

In the world of snow vehicles Yamaha owns the 4-stroke heartbeat of snowmobiling.

Last time I checked, you don]t ride a motor down the trail; you ride a whole snowmobile.

I’ve got to admit, the Apex is a pretty cool package – mostly in the 128-inch version (I’m not crazy about the 144-inch LE) and it does have a sweeter engine than the 1056cc Suzuki twin in the Cat.

Everything stops there, though. Technical wizardry and electronic gizmos do not guarantee greatness. Give me a tight, lithe, chassis that carves apexes (no pun intended) like a Ginsu, and I’m hooked.

The new SnoPro and LXR EFI equipped ProCross Cats are, to my mind, the absolute acme of the 4-stroke snowmobile genre. You can ride these sleds all day long and even the most dedicated 2-stroke owner would have to concede they give up nothing in riding enjoyment, handling and ride to a 2-stroke.

Hey, there’s the weight thing, too. We’ve been ranting about this for years but it’s always been the deal-breaker with 4-stroke sleds. Jump back and forth between the Apex and the ProCross 1100 and there is simply no comparison in the weight department.

Mark, you got your way on this one with pure political clout. Don’t expect it to happen again.