WILL POLARIS BUILD A 4-STROKE? 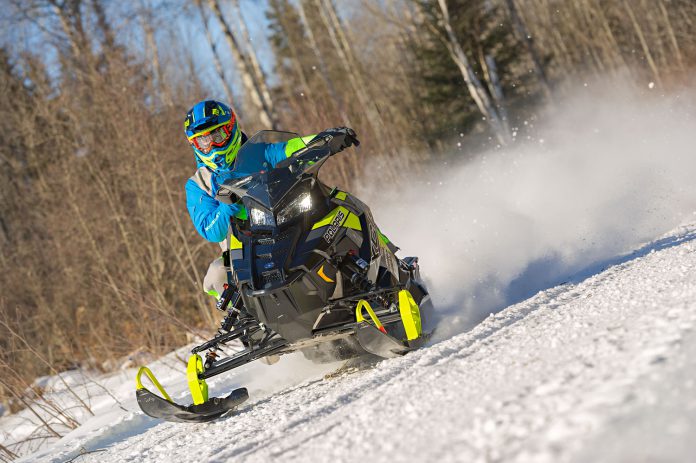 We’ve bantered the idea of a Polaris 4-stroke equipped sled back and forth for a couple of years now. Here’s some of our current thinking:

The cost to develop an all-new snowmobile 4-stroke is high.

We’ve often speculated that Polaris could use a variation of its strong running off-road RZR 1000 4-stroke twin as a snowmobile engine. As time rolls on and the competition brings out new stuff, this seems less likely as the trend in performance snow engines tends to be toward triples.

The competition is doing a too-good job of marketing turbocharged and EFI triples and consumers like them. No matter how good a Polaris RZR twin is, will it have the sizzle of the current 3-cylinder competition?

How about this: What if a new 4-stroke Polaris was a triple? Yes, it would be a big dollar investment in a completely new engine for a relatively small market – unless of course, if it could be adapted for off-road use, too.

This brings up another point: The self imposed industry displacement limit for off-road stuff is agreed to be 1000ccs maximum. That would mean Polaris would be offering both a 1000cc twin and a 1000cc triple. Hmm.

4-strokes only account for about 25-percent of the market. If half the potential buyers in the snowmobile biz were shopping 4-strokes, Polaris would be on it.

However, the sales numbers seem to plateau around 25-percent. Polaris would be entering a wedge of the market that is already dominated by many happy customers – and it’s only a quarter of the whole market.

What would be the potential for Polaris to own credible market share? Not that good unless the new engine was absolutely killer!

Nobody’s talking and every time we ask, Polaris has been pretty evasive about the viability of the 4-stroke market. There’s been no firm confession its design and engineering people are working on 4-stroke snowmobiles – and as you know, we’re pretty good at espionage.

What they do is quote us the sales numbers and the potential for growth in the industry in the 4-stroke sector. They claim it makes more sense to focus on building really good 2-strokes and applying their engineering efforts to dominating in that engine choice.

They’ve been very good at this and every model the company has brought out the last five years has been a homerun.

Kent Lester
Kent Lester is Co-Publisher of SUPERTRAX Magazine and a regular contributor to this website.
Previous articleAN ALL-NEW VIPER
Next articleDEFINING THE HYPERSLED