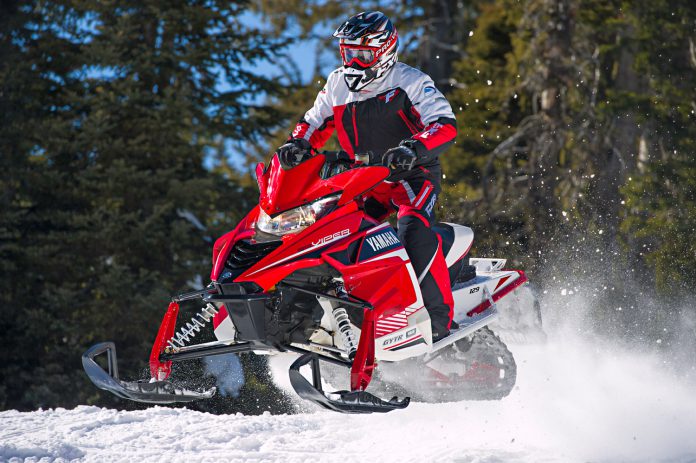 Other than the SideWinder SRX there hasn’t been a lot of new stuff from Yamaha for 2019. The company’s focus has clearly been on getting rid of non-current sleds and rationalizing its product line by deep-sixing some long established models like the Vector, Apex and Phazer.

Last year we wrote an article about what we’d like to see done to the next-Gen Viper (THE NEXT VIPER.

When the topic came up in discussion this year, we found it interesting how strong our opinions remained. Maybe we’re onto something – maybe not!

We’ve been in a bit of a quandary about the Viper. This 1049cc 4-stroke triple powered sled has been very popular with trail riders for several years but for some reason Yamaha has resisted upping its tech-load with new features. This year’s version is pretty much the same sled as it was in 2014.

This has been particularly puzzling because Yamaha’s inventory of unique design stuff is bursting at the seams for this sled. Here’s a few examples:

Yamaha perfected YCCT electronic throttle control on the now-discontinued Vector, also used it on the 2-up RS Venture and it is excellent. There’s no throttle lag at all with it and it’s completely transparent and seamless in its operation. We can’t help but think Viper customers would love this – and it’s been field tested to perfection on the same 1049cc triple as the Viper.

The roller secondary developed for the SideWinder would be a welcome addition to the 1049 Viper, once recalibrated. This would put the Viper right into the wheelhouse of other trail-targeted 4-strokes and its excellent performance and backshift would no doubt improve overall performance without doing major engine tuning.

It’s a no-brainer that the same quick-remove plastic the Arctic Cat 7000 uses should be used on the next Viper. Why not this year? Dunno!

This smart technology netted the Apex better bottom end and a significant boost in performance a few years ago. Why not adapt it to the 1049? The tragedy is, this technology is pretty much wasted now that the Apex is gone.

With a new Viper, Yamaha needs to up the HP sauce. There needs to be a jump of about 5-10 horsepower in the next iteration and here’s proof: Guess what Ski-Doo did with the 2019 version of the 900 ACE in the G4 chassis? Yep, they added 5 more ponies and made every 900 ACE customer out there jealous and hungry to get at the newer, faster version.

Here’s a couple of things that are a bit of a stretch but could be adapted to a new Viper:

Some have told us we’re nuts to even think about this but it makes sense from a weight-saving perspective: The 129 and 146-inch Vectors and Apexes with this skid worked very well and it’s a lighter skidframe. This change would also make the Viper more distinctive from the Arctic Cat 7000 versions – something Yamaha purists seem to be barking about.

Certain upgraded models (Viper LTD) of the Viper and the new Venture SR could adopt EPS. This long-tested Yamaha-tech is well proven and makes a deluxe version of the Viper pretty appealing.

No matter how you cut it, it’s time for Yamaha to breathe new life into the Viper. Right now the Viper is the only 130-hp-class 4-stroke on the market that hasn’t been updated. We think customers are waiting for the next generation and will jump on it like a cat on tuna.

Kent Lester
Kent Lester is Co-Publisher of SUPERTRAX Magazine and a regular contributor to this website.
Previous articleHow to Prep Your Snowmobile for Winter: Expert Tips to Get Your Sled Ready
Next articleWILL POLARIS BUILD A 4-STROKE?