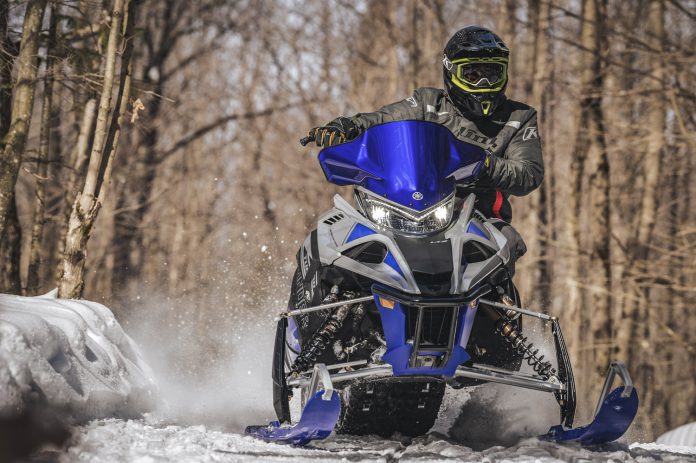 This is a big question that continues to lurk in the minds of certain snowmobilers.

Frankly, it’s our observation that Yamaha riders are much more concerned about Arctic Cat providing platforms for their fave brand than Arctic Cat owners are about Yamaha providing engines for AC snowmobiles.

Most Cat owners we’ve spoken to love the marriage and love the 4-stroke triples Yamaha provides in either naturally aspirated form or turbocharged.

Keep in mind, this union has been ongoing now for almost a decade – and both companies have prospered because of it.

What seems to stick in the craw of Yamaha enthusiasts is that Yamaha sleds look so much like Arctic Cats. No argument, that is a fact. Although there are subtle aesthetic differences, if you stand back and squint at them, the two brands are unmistakably similar.

Yamaha has specified certain differences in, say, the SideWinder. Comparing the SW to a T-Cat, although there are subtle variations in the hood and windshield designs, the tech differences are limited to the SideWinder’s unique Yamaha-engineered primary and roller secondary clutches.

The Yamaha has also added its Stryke skis to the mix with good success. Other than those two technical differences there may be some differences in suspension packages on certain parallel models to Arctic Cat – but that’s pretty much it.

If you check out the whole Yamaha model line-up from value sleds to mountain to trail, the similarities between Yamaha and Cat are unavoidable. However, touring and utility sleds are considerably different with Yamaha still offering some models on the RS platform and the Viking Professional as a pure Yamaha offering. So far Yamaha has no 2-stroke crossover sled and presents the turbocharged SideWinder X-TX as its primary X-Over.

The bonus for Yamaha owners is the evolved nature of the Cat chassis. Yamaha owners are the beneficiaries of excellent handing and very good ride characteristics on pretty much every model now.

Could Yamaha do more to make Yamahas look uniquely Yamaha-ish? Certainly. The seat and tail-over-the-tunnel design could be redesigned to perhaps offer more comfort and a different side view. Both companies have done a good job with unique branded paint colors and graphics, but maybe a new set of hoods and windshields would be in order on some models.

One thing we’re holding our breath for is the long-rumored chassis change Arctic Cat has supposedly been working on. If there is a new ProCross II chassis in the works up ahead, would Yamaha sleds suddenly adopt that platform or stick with the original?

It seems to us that based on the way things have gone, manufacturing economies of scale would dictate that a ProCross II would become a new SR II right away. Maybe both companies would be missing the boat if that were the case.

Snowmobilers are proud, brand-loyal people and don’t always cotton to the idea their sled could be mistaken for something else. Hey, it doesn’t make any sense to us when you study how the co-operative manufacturing process has been such a boon to both parties.

It’s a strange world out there in sno-mo-land!

Supertrax Onlinehttps://www.supertraxmag.com
Check back frequently for new content and follow us on social media!
Previous articleGlobalstar Canada and CCSO Urge Riders to Get Gear Ready Earlier this Season
Next article2021 SNOWMOBILE HALL OF FAME INDUCTEES