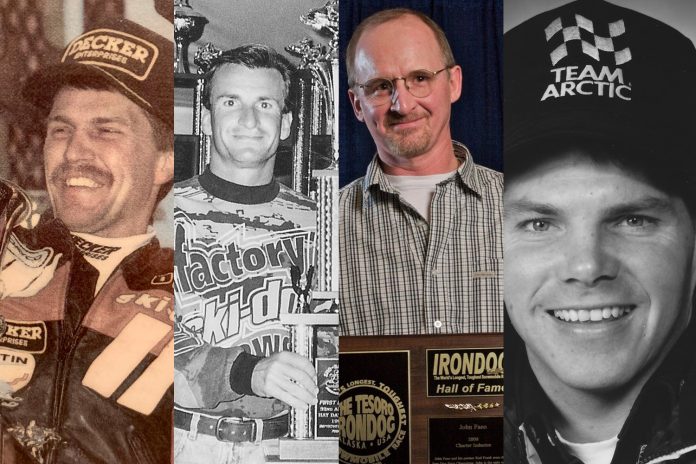 These honorees will be inducted into the SHOF during a two-day induction ceremony weekend, February 18-19, 2022 in St. Germain, coinciding with the 38th Annual Ride With The Champs and other events, presented by Livingston’s Arctic Cat. All snowmobile enthusiasts and race fans are invited.

John Faeo is synonymous with the famed 2,000-mile Iron Dog through the Alaska’s rugged and remote wilderness, winning this grueling multi-day event seven times between 1984 and 1996. In addition to his record-tying number of victories, the Wasilla, AK, legend also finished the Iron Dog race 23 consecutive times, with 13 podium finishes.

Fast, smart and consistent beyond measure, Faeo is also a 9-time Alaska Motor Musher XC race champion; a 6-time winner of the Talkeetna-to-Anchorage XC, and an 11-time Alaska Calcutta 120 XC Champ. He raced on Polaris snowmobiles for the majority of his career.

One of the most enduring oval racers of his generation, Dale Loritz of Green Bay, WI, scored innumerable wins—in a range of classes—at all levels of the sport. He qualified for the Eagle River World Championships an astounding 18 times, and won the pinnacle event in 1994 and 1995.

Racing for Ski-Doo throughout his career, Loritz notched 14 USSA high-point class championships, including seven Formula 1 titles. He was the USSA and Snow Week magazine Driver of the year in 1989, as well as USSA Oval Racer of the Year (2003) and a 2-time Sportsman of the Year.

Motivated, focused and unwavering in his pursuit of success, Craig Marchbank of New Lennox, IL, set benchmarks and records in snowmobile drag racing that may never be exceeded.

In a 30-year career that began in 1982, Marchbank claimed more than 2,200 class final victories en route to 26 High Point Championships in Pro Stock and 24 High Point Championships in Improved Stock, all aboard Ski-Doo snowmobiles. He was the Minnesota Cup Champion a record nine times; a 5-time Michigan Cup Champion; and 3-time Wisconsin Cup Champion. He was the 2005 Snow Week magazine Racer of the Year, as well as the ISR Woody’s Traction Racer of the Year.

In ice lemans he won two MRP Formula III high-point championship and World Series titles, and he scored two snocross Pro Class wins at the Duluth National. He was awarded Racer of the Year honors by Snow Week magazine, SnoWest magazine, and MIRA. After retiring from racing, Sturgeon became the Arctic Cat Race Manager beginning in 1999.

Snowmobile racing fans and enthusiasts are invited to the 38th Annual Ride with The Champs and induction ceremony weekend, presented by Livingston’s Arctic Cat, February 18-19, 2022. The expanded two-day event features guest speakers, vintage and modern trail riding opportunities, a meet-and-greet with past and current SHOF inductees along with other snowmobile industry celebrities, and a formal induction ceremony with dinner. In addition, the Snowmobile Hall of Fame Museum will be open throughout the weekend.

Press Release
Previous articleWILL CAT AND YAMAHA BUILD TRULY DIFFERENT MODELS?
Next article2022 Ski-Doo Renegade Enduro: FOR RIDERS WHO KNOW WHO THEY ARE!