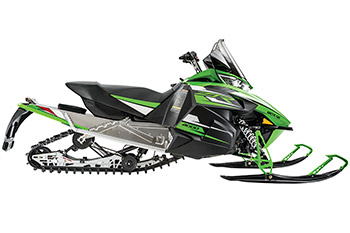 We’ve been wondering how Yamaha felt when Arctic Cat decided to use a competitor’s 4-stroke in its 2016 model mix.

We had been speculating Cat might utilize Yamaha’s amazing 500cc Phazer twin in some of its stuff in the future but that just doesn’t look like a possibility.

Fact is, the 500 Yamaha is a very expensive engine to produce because it makes its 80-horsepower within a stoccato RPM range and its precision build-quality makes it rather complex to manufacture economically.

Since Cat wanted to get into the 4-stroke utility, entry-level and touring market with a sled making closer to 65-hp, there just wasn’t a Yamaha engine that could fit the bill.

Since Arctic Cat had already had some exposure to the 700 Kymco twin in its off-road SxS Wildcats, they had a pretty strong idea this engine was adaptable to its ProCross snowmobile platform.

We were surprised however, that Cat leaped over Yamaha to go to Kymco as a fourth engine supplier. This development is a very wise move for Arctic Cat considering the manufacturing agreement with Suzuki may be drawing to a close and what we don’t see is what is being developed out there in the way of new engines from Yamaha, Kymco and especially, the St. Cloud facility.

Frankly, we suspect a new 800 DSI mill will be built on the same assembly line as the 600 and Yamaha just released a new 998cc triple for the SxS business that looks a lot like the 1049 triple.

Who knows how fast Kymco could tool up a bunch of new engines? Way cool – if you’re Arctic Cat!