WHY POLARIS NEEDS A 4-STROKE! 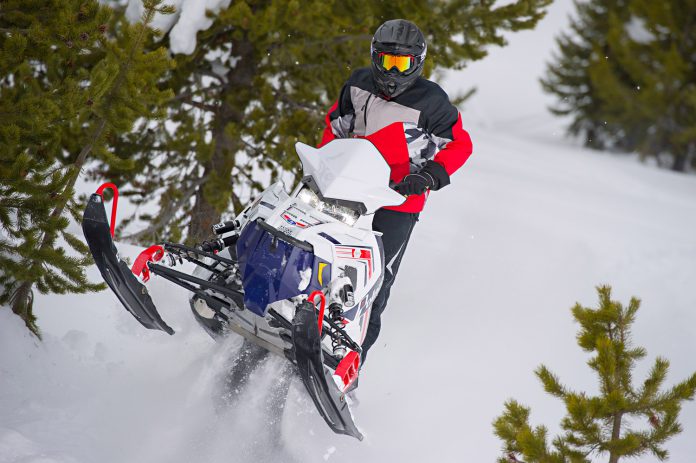 We’ve been speculating on Polaris’ plans for MY2019 ever since the snow started falling a couple of months ago.

Although we’re only guessing, we can’t help but think this is the year Polaris gets into the 4-stroke biz – again!

Why is this so important? Well, as of today, Ski-Doo is so dominant in the snowmobile business, the other guys aren’t catching up. Polaris’ main competitor is kicking butt in 2-stroke, 4-stroke in the whole snowmobile market – and in nearly every segment Polaris has a foothold.

Our research has shown 4-stroke sleds continue to hold between 25-30-percent of the overall market. This is no wink-wink, nudge-nudge tally. If you’re not serving 25-percent of the wishes of your marketplace, one in every four sleds sold is not your brand – you’re not even getting a shot at it, and that’s a lot of moolah!

Hey, we’re right onside with Polaris’ argument that 2-stokes perform better because of their inherent lighter weight. No argument from us at all. However, thousands of riders prefer 4-strokes for a jillion reasons and although they love the Polaris brand, end up buying a competitor’s offering just because it’s a 4-stroke. Some of those customers come back, but a lot don’t.

Hey, we know we’re not telling you something Polaris is simply ignoring. These guys are smart and read the snowmobile market like the daily newspaper. Here’s what we’re thinking: We have often speculated Polaris will use a version of its 1000cc turbocharged 4-stroke twin presently inhabiting it’s RZR off-road Side by Side.

We now think that may not be the case. Although that engine is powerful enough and durable enough to win favor in the snowmobile market, we thing it lacks the sizzle the competition is generating with big-inch triples.

This would mean an all-new 3-cylinder engine, probably tooled in the USA, that could incorporate variants for both turbo use and natural aspiration (EFI).

Whatever is sitting on the back burner, it’s way past time to get it to consumers. Maybe this is the year!

Kent Lester
Kent Lester is Co-Publisher of SUPERTRAX Magazine and a regular contributor to this website.
Previous articleHOW MUCH WILL ARCTIC CAT CHANGE?
Next articleWILL SKI-DOO’S NEXT-GEN 4-STROKE BE A GEN-4?