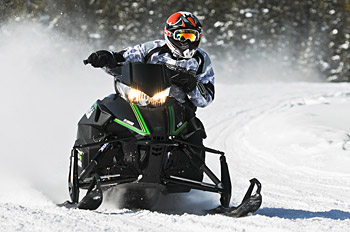 Two days ago, at the Holiday gas station in the town where I live I had a short conversation with a stranger (we were both filling spare gas cans and wearing Arctic Cat jackets…go figure!) about the sled I’m riding this year: a 2012 F1100 Sno Pro in 50th trim.

If you’re that guy and happen to read this, here’s a more thoughtful answer than my short reply that day at the pumps.

Despite being a lifetime rider of small-to-medium-hp sleds (500s and 600s baby!), I fell in love with the 800 H.O. last season. It was an incredible engine that amazed me as much for its low to mid-range manners as it did its searing top end.

The fact that both my son and wife loved this sled is testament to the fact that it can cruise at an easy pace just as easily as it can rip.

Stepping down 40 hp to an 1100 wasn’t so much a choice of hp, it was a choice of chassis and ergonomics.

More than anything else, those two areas are what distinguish the ProCross from the Twin Spar.

The ProCross platform reacts to rider input in a way that the Twin Spar couldn’t. I distinctly remember riding an F1100 through the town of West Yellowstone last winter.

I like berm-shotting off the snowplowed banks whenever riding along the side of a road. The first time I did the little maneuver to get up on the 3-ft. bank, it reacted so quickly that it put me on top of the bank! No way would the Twin Spar do that with an equal effort. The F1100 ProCross is truly nimble feeling.

Likewise, compared to the Twin Spar, the ProCross reacts far more quickly and positively in the following situations:

1. Brake drifting into a corner (tapping the brake to initiate a skid for cornering);
2. Leaning the sled over while in powder
3. Correcting any inside ski lift by leaning

Ergonomically, the new ProCross works way better for my 5’8″ frame. The seat is narrower and shaped so that I can easily hang off the side while cornering, something that was far more difficult on the Twin Spar.

There are other differences in favor of the ProCross that are less important, yet still meaningful:

First,better braking performance and secondly while purely subjective, I think the ProCross looks way cooler than the Twin Spar. Especially with the 50th trim, which makes me feel like Dimmerman or Elsner.

This is especially important at this time of year, when I spend a lot of time looking at the sleds in my shop. LOL.

The Twin Spar might be the best all-day cruising sled ever built. If I get to notch a 200-plus mile day this year on a ProCross, I’ll have a better opinion about which sled is better. But most of my rides are 100 miles or less.

Bottom line, the 1100 ProCross package brings out a fun-factor that I never experienced with the Twin Spar platform.

I had a long, tough internal debate about which motor I was going to go with. As I mentioned above, the 800 H.O. is a sweetheart of an engine, with no trade-offs in terms of fun and civility.

Riding the 1100 for a few days in West Yellowstone, I came away thinking how much better that engine feels in a lighter, narrower and more responsive package (ProCross) compared to the Twin Spar.

Seriously, I believe that had the 1100 engine made its debut in ProCross, it would never have gotten the less-than-enthusiastic snub that some have given it.

– Smooth
– Quiet
– No need to add oil
– Makes possible the heated seat
– 120-horsepower range, which has long been my sweet spot

– Heavier than an equivalent 2-stroke
– During acceleration, the exhaust note doesn’t give the same perception of speed/power.
– The required break-in procedure will really test my attention span and my patience.

After spending a week debating the pros and cons in my mind I opted for the 1100. This will be my first 4-stroke sled and the curiosity of that helped push my decision.

I love the 4-stroke dirt bikes I own, and that transition (from 2-strokes) was seamless.

I will reserve final judgment until I’ve logged enough miles to have a more informed position.

I may regret my decision not to get the 800, but from a practical standpoint, I believe it will be easy to sell used F1100s for quite some time.

Likewise, used sled prices are (finally) in the range that it’s possible to buy/sell every year or so and not feel gutted. So if I absolutely must go back to an 800, it won’t be a financially wrenching process.

Bottom line, the 1100 engine blossomed when it slid into the ProCross chassis. It’s in my preferred hp range and it offers some new conveniences that I expect to enjoy.

Why the standard 1100 instead of the Turbo?

This one’s easy: I almost never feel the need to go 115 mph, or whatever top-speed the Turbo will hit.

Seriously, I predict that there are going to be some very surprised Turbo owners who, if they’re completely honest, will wonder why they bought a sled with so much speed/power on tap.

For me, this is too much engine/too much speed for the kind of riding I do. It’s also heavier than the non-Turbo, and more expensive.

If I wanted more than 120 hp, I would have chosen the 800 over the Turbo. I prefer the 800s more instant low and mid-range hit to the slightly lazier Turbo, as well as its lower weight.

When I lean on an engine’s power, it’s for the “hit” rather than terminal velocity. Like popping the front end in the air off a ditch approach, or those first 5-10 seconds of acceleration from a dead stop.

Bottom line, the Turbo is about insane top-speed and that’s just not my priority.

To read more great Arctic Cat editorial by John Sandberg, visit ArcticInsider.com and be sure to register here so you can post in the forum!

Supertrax Onlinehttps://www.supertraxmag.com
Check back frequently for new content and follow us on social media!
Previous articleBRP THROWS ONE HECK OF A PARTY
Next articleRED BULL: NEW YEAR. NO LIMITS. CALL IT A COMEBACK