BRP THROWS ONE HECK OF A PARTY 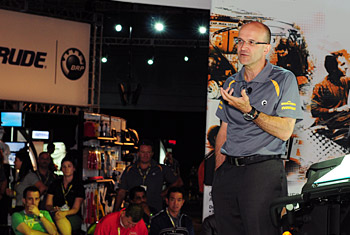 This past July in Montreal, Quebec, BRP – makers of Ski-Doo snowmobiles held an impressive party the size of which we’ve never seen before.

The company decided it would have a once-in-a-lifetime dealer and media spectacle that would allow over 4,000 dealers from around the globe to come to Valcourt and Montreal and visit the home of Ski-Doo, Sea-Doo, Can-Am and Evinrude.

The event included the largest corps of media we’ve ever been involved with in 23 years of publishing – over 70 media outlets from as far away as Japan, Europe and South America were invited and treated to a total immersion in all things BRP.

Included in the week-long event were factory tours witnessing Can-Am Roadster and Ski-Doo snowmobile production, visits to the J. Armand Bombardier Museum, tours of the incredible Laurent Beaudoin Design and Innovation Centre and access to ride everything the company makes (except snowmobiles) at the downtown Montreal St. Lawrence riverfront “Ultimate Playground” facility.

Clearly, BRP is positioning itself for a strong comeback and increased presence in the powersport industry. Supertrax and SnowTrax Television represented the snowmobile enthusiast media and you can count on seeing a feature about this event this season on SnowTrax!