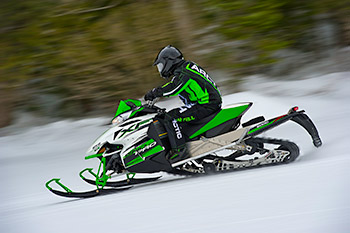 We’ve had a few discussions recently about which manufacturer is being the most aggressive in the snowmobile marketplace.

Aggressive would be defined as going after new market share, pulling percentage points away from its competition.

With the intro of the new AXYS this year it would be easy to say Polaris is the most aggressive. This sled series has set the bar high for the competition with class-leading lightness, ground-breaking electronic innovation and a new 800 engine that rocks.

The company’s reach into the utility segment with its Indy series has been very successful and the company is still a very strong player in the mountain and free-ride categories. It offers tremendous value in its trail-based Indy line-up and impressive performance, too. Polaris is far from sitting still.

Yamaha is showing signs of being more aggressive with models like the RTX and LTX LE featuring very good fully adjustable suspensions. The company’s product line is now very closely tied to Arctic Cat and that may be a limiting factor as to how aggressive Yamaha can be in the marketplace.

Ski-Doo has addressed handling with its new RAS 2 front end and still offers top deck ride compliance from rMotion. Its 900 ACE 4-stroke is a big success and the E-TEC DI 2-strokes are still industry leaders in fuel economy and squeaky clean emissions.

The company is showing signs of being one-upped in some power categories and even in lightness and chassis design, though. With a huge share of market and some really great product, however, the company may be able to sit back and cruise a few more years without getting too aggressive.

Then there’s Arctic Cat. In the last two years this company has become a key supplier to Yamaha, brokering a deal to use the company’s stellar 4-strokes, has introduced a tremendously appealing new 600 2-stroke and introduced a highly successful chassis variation, the 137-inch XF series.

We think Cat’s aggressiveness will continue with some interesting engine and model variations, maybe even in MY 2016, and this is the year that will truly show who is being the most aggressive in the snowmobile market.

Dream about a new DSI 800 or using other Yamaha engines like the Apex 1000 4-cylinder or even a variation on the Phazer’s 500 twin. Then there’s the mountain market: Cat is tired of being in the shadows in this segment and may be coming with a gut-busting variation on what it’s been producing for the hills.