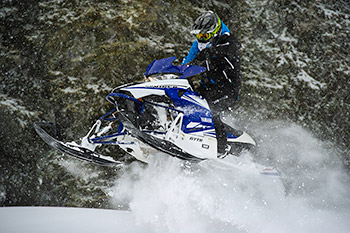 There’s no doubt Yamaha’s manufacturing agreement with Arctic Cat has been a success for Yamaha.

If for no other reason, the company has been able to double its line-up of new vehicles and can now compete head-on in categories it was not present in before.

Here’s where we wish the agreement would go in 2016: We’d love to see more Yamaha engines put to use in the ProCross (Yamaha SRV) chassis.

We’ve discussed the potential for a transplant of either the Phazer’s 500 twin or the Apex 4-cylinder in modified versions of the Viper platform. Either of these changes would offer customers some pretty cool choices in categories where two of Yamaha’s signature sleds need a revamp.

It’s been two model years now since the agreement was signed and we’d like to think the Japanese manufacturer has been busy doing some of its own innovating. One such change could be the intro of an all-new engine that bridges the gap between the 500 twin and the Viper 1049cc triple.

A smaller displacement, slightly lower tech, lower weight 4-stroke displacing somewhere between 700 and 800ccs could be a useful engine in the utility segment and would entice 4-stroke owners into a trail performance sled of the same ilk as Ski-Doo’s very successful ACE engines.

Here’s another one: We’d love to see Yamaha offer its own roller secondary clutch on all Vipers. We think this addition would only be a good thing for the company’s performance image and a stronger backshift would make the Viper even more appealing.

A prime example is the limited build and very successful 2015 LE series in these two categories that offer more sophisticated rear shocks with compression clickers on them. These sleds have been a homerun and prove that performance consumers want more adjustability and the capability to fine-tune their sleds for their specific type of riding.

Just a few ideas and there’s more top-secret stuff coming in the next issue of Supertrax.