WHERE’S THE SWEET SPOT FOR HORSEPOWER? 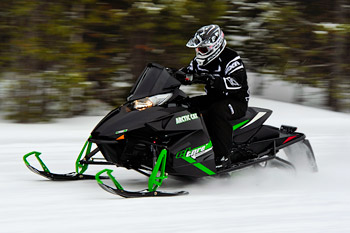 Model year 2014 has been an interesting study in the buying desires of snowmobilers.

By far the biggest sellers this year have been the 130-hp Yamaha Vipers, Cat’s 7000 series models and the all-new 600 C-TEC2 El-Tigre. Even Ski-Doo’s new 90-hp 900 ACE engine has been a big hit. What do these models have in common?

The answer? They all fall into the middle of the market as far as horsepower offerings from their respective manufacturers.

Although the big-inch 800s and highest performance 4-strokes seem to get all the press, it looks like the bulk of buyers are actually looking at sleds producing less than 135-hp and big numbers are shopping in the 100-hp area.

It brings up an interesting point about snowmobilers. When the big check is finally written on the day of purchase, it looks like the vast majority of buyers do not make ultimate speed and acceleration their main priorities.

To be honest, though, we need to keep things in perspective. For instance, a 2014 600cc 2-stroke makes power very close to the highest level of performance offered ten years ago.

Adding to this is the fact the new sleds are much lighter and their power-to-weight is probably just as efficient or even better than those sleds were.

So, yes, most snowmobilers are still high performance buyers but there seems to be a plateau where the majority of them are satisfied.

At the top of the scale, does it mean there really is a horsepower ceiling buyers don’t wish to exceed?

Think about this: What if the standard for an 800 2-stroke went to 170-plus ponies. Would there be more of them sold or less? Would it force buyers into a middle segment where the market offers less power, say 130-135-horses?

There’s no question buyers in the hyper-segment are always looking for more power. The bigger question is this: Would the OEMs actually sell more sleds in a higher power range than they do presently – or less?

Kent Lester
Kent Lester is Co-Publisher of SUPERTRAX Magazine and a regular contributor to this website.
Previous articleSnowTrax Television 2014 – Episode 4 Preview
Next articleWHAT THE MANUFACTURERS REALLY THINK OF TURBOS