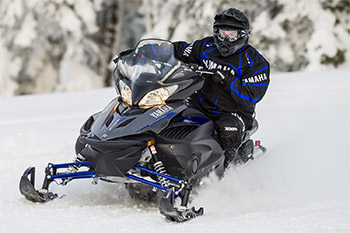 Making some pretty significant changes to the Vector and Apex this year really got us wondering where Yamaha intends to take that technology in the near future.

Just to refresh your memory, Yamaha went to a YCCT drive-by-wire throttle system on the Vector, made internal changes to the pistons, rods and crank on the 1049 and then introduced a completely re-done, lighter skidframe called SingleShot.

Here’s a guess on where this is going – particularly with the Vector. We’d be gambling, given the success of the SRViper and the desire of Yamaha brass to make the sleds more distinctively Yamaha-defined, the SingleShot could show up in the Viper platform within the next two years.

We think this is a good guess but doubt it will happen in MY2017. Why? We don’t think Yamaha is ready to completely displace the Vector yet and has invested rather heavily this year in making it more appealing.

Even two years down the road, given Yamaha’s conservative approach, we doubt neither the Vector nor the Apex will be completely phased out – even if there’s a huge crossover in borrowed technology between those two and the Viper.

One thing we do think you’ll see in the upcoming model year Viper is a change to the upgraded 1049 triple with drive-by-wire. It just makes good economic sense to use the same engine in both sleds and, with Ski-Doo offering DBW in all its 4-strokes, we doubt Yamaha will just lay back and let SD own that technology in the snowmobile biz.

As for the internal changes to the already super-efficient and durable 1049, we think it can only spell one thing: Turbo!

Kent Lester
Kent Lester is Co-Publisher of SUPERTRAX Magazine and a regular contributor to this website.
Previous articleTRIPLES VS TWINS
Next articleSKI-DOO X-TEAM RESULTS FROM FARGO