WHEN WILL WE SEE A NEXT-GEN SKI-DOO? 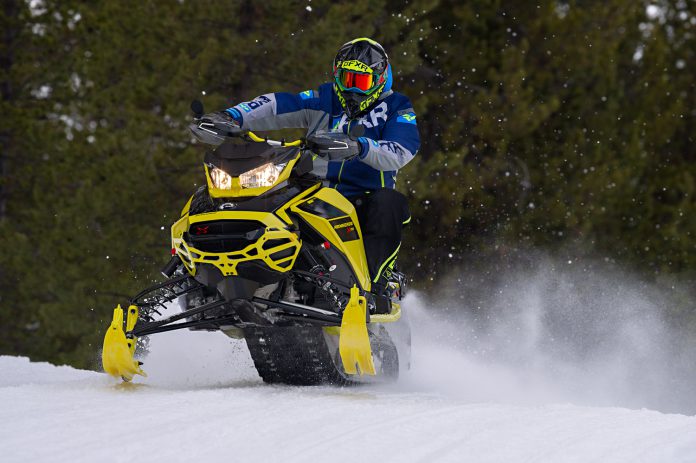 What we’re asking here is if the current Gen-4 will be replaced now that Polaris has come with its new MATRYX platform?

The reason we’re wondering if there will be something offered beyond a potential Gen-5 (a G-5 and a G-6) is a bit more technical.

Since its introduction, one of the Gen-4’s hallmarks has been the mass centralization of the company’s 2-stroke engines in its bulkhead.

When the 850 E-TEC was first announced, it was fascinating how Ski-Doo had redesigned the conventional 2-stroke so the engine was much narrower – particularly by using a “flat” stator so the engine could be positioned more to the middle of the sled. This was a pretty big innovation at the time and was deemed to solve all handling problems because now the sled was designed with weight distribution perfectly in balance.

We’re pretty convinced Ski-Doo will stay with this “centralized” design innovation on all future 2-stroke platforms – thus, a new Gen-5 with these above listed engines under the hood will likely be similar in layout to the G4. We would gamble there will be a body-plastic restyle but not much else.

Whether or not the engine positioning change cured all handling ills is still up for debate and is really a moot point anyway since Ski-Doo has already brought out a new “X” design front end for MY2021.

The Gen-6 concept is all ours – and just addresses a problem we’ve been mulling over. It’s this: Ski-Doo’s strong selling 4-stroke line-up, comprised mostly of the ACE 900 EFI triple and the turbo version of the same engine, doesn’t appear to utilize the same science as the 2-stroke G4 chassis.

The 900 ACE 4-strokes are comparatively wider (at least 30-percent) compared to Ski-Doo’s 2-strokes and have different front bodywork that includes wider belly pan “jowls”, obviously to accommodate the extra width of the triple. The unofficial nickname for this 4-stroke design is the “Wide-Body”.

Although these Ski-Doo 4-stroke sleds are decent handlers, we can’t help but think the centralized weight theory simply doesn’t apply the same way it does in the 2-stroke twins.

Thus said, we’re wondering if we’ll see a different version of the current Gen-4 based 4-stroke sleds – similar to the XR concept that housed the now-deleted 1170cc triple – intended to be a more 4-stroke specific design. We’ll call it the Gen-6.

Perhaps a “Gen-6” design will allow Ski-Doo to better apply its centralized mass theory to a 4-stroke.

You’ll also recall how the former XR series Ski-Doos were introduced a full year after the XS 2-stroke models. We’d guess when (and if) a Gen 5 lands, it will be a year or two later before we see a “Gen-6” 4-stroke chassis.