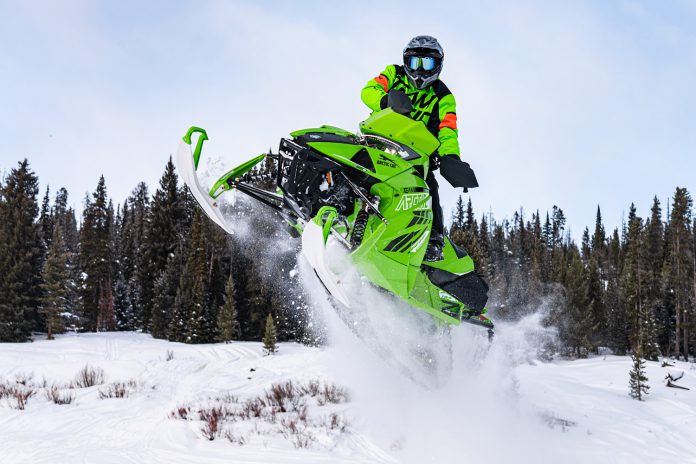 Cat’s ProCross platform has been around for ten model years now. This would seem pretty ominous if the chassis had been less effective.

As it is, the wide-spaced A-arm design has proven to be an excellent handler and its ability to house a complement of different engines – everything from a 500cc 2-stroke to a bevy of 4-strokes – some with turbochargers – and still maintain excellent ride and handling manners is nothing short of miraculous.

It’s a credit to the fine engineering people Arctic Cat has employed over the years. These squads of innovators have seen the company through some pretty rough years and have still been able to deliver great, competitive and contemporary sleds, not only to serve the Cat market, but Yamaha’s unique blend of owners as well.

When the 2022 models were revealed last January with a new, narrower clutch design, we immediately began to speculate Cat had some intentions to introduce a fresh snowmobile platform sometime soon.

Although we hesitate to guess what new features a Generation 2 ProCross platform would have, we can stab into what a new chassis will have, though. We can almost guarantee Arctic Cat will stay with the wide spaced A-arm design it’s used for a while now. Simply, there’s no reason to change something that has worked so well for so long. Handling has always been sharp and predictable and whatever theory the engineers came up with last decade has proven flawless.

New styling? We think this is absolutely a possibility! Cats have looked similar for a long time now – and although there was an update to sleeker looks and better panel removal a few years ago, it wasn’t a radical change in appearance.

We think, in order for Cat to get the full attention of prospective buyers – and to move buyers over from other brands – it’s time for something big in the looks department.

Why the narrow clutches? Certainly, in the mountain and crossover deep-snow markets, narrow is good. Cat’s narrowed Ascender vertical platform has preached narrowness and it really does make a difference lessening “paneling” on sidehills and reducing drag in deep fluff.

Focusing on narrow sleds may be an indication Cat sees the future of snowmobiling will be toward sleds with deep snow capabilities prioritized over trail use. The market kinda looks like that right now, doesn’t it?

Narrowness as a design goal may be a bit challenging with Cat’s current menu of turbocharged sleds. Check under the hood of a T-Cat and it already looks like a miracle of tightly crammed packaging. Would all that hardware fit and stay cool?

For sure, narrow is lighter. One guaranteed way to hack weight is to make sleds a couple of inches narrower. It also perks up aerodynamics and reduces drag at high speeds.

Ergonomics is another benefit. A narrower sled at the running boards and the front of the seat is more maneuverable and way more comfortable, standing or sitting, than one that’s porky in the middle. Polaris has learned this and applied it with huge success to its MATRYX platform.

Although Cat sleds offer competitive skidframe ride results, one way to blow by the competition would be with a new ride innovation that reduced unsprung weight and gave even more compliance.

It would involve the same kind of inventive thinking that dreamed up the slide-rail suspension in 1960s or coupled skidframes in the 1990s. Once again, Cat would need to rely on its engineering depth to come up with concepts that achieve these goals.

We’re taking a “wait and see” attitude right now, but the elephant standing in the corner of the room is a product that is long overdue for a radical update.