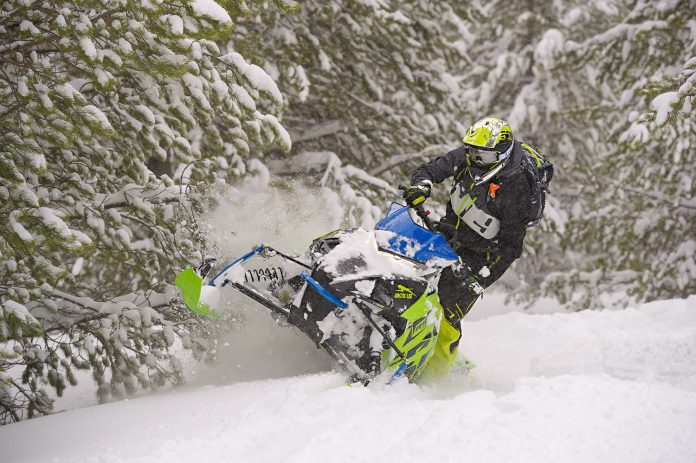 Now the Arctic Cat media embargo on information surrounding the 2020 models has been lifted, we thought we should bring you up to speed on some of the things we learned while at the annual Snow Shoot event in West Yellowstone, Montana, held the last week of February.

First, Arctic Cat looks quite a bit different these days from a personnel standpoint. Textron has been making changes that appear aimed at streamlining its off-road division from a product and a human resources standpoint.

Here are some of the comments engineering boss, Brian Dick (and others), made in their presentation to the media in West Yellowstone. Keep in mind, Brian is one of the most respected individuals at Arctic Cat – and quite frankly, in the whole sno-mo-biz.

“Arctic Cat is not for sale”. That this statement was even made is a clear indication Textron has been fielding a lot of questions similar to this. It’s important that it was Brian Dick saying this. He adds a mountain of credibility to the message and, as a result, these rumors should quiet down.

“Arctic Cat is committed to investing in new product”. Again, Brian would know if this was true or not and he made it clear there are new projects underway and the market will be seeing these innovations over the next few seasons. He was predictably light on a time line for new stuff to arrive.

“Arctic Cat must clear the decks of unsold, non-current sleds”. We thought that was what the last leadership team from Textron was doing this season. Apparently, there are still too many unsold sleds sitting in boxes. These sleds only go down in value every day (and every year) they sit unsold. While details are very sketchy about the total number of non-current unsold sleds, we believe it’s significant.

“If you want a 2020 Arctic Cat model you have to Spring Order it”. This was a biggy. While it seemed to take a couple tries to make this statement sink in with clarity to those in attendance, the reality appears to be this: Arctic Cat is offering a MY 2020 lineup of about 35 models – including variants. For the record, this is about half of what Arctic Cat would normally present for their new model launch.

Clearly, there are enough non-current sleds sitting around for dealers to order that a smaller 2020 model build should be able to enhance, or least add some sizzle to, these as-yet unsold non-currents.

It’s a complicated equation – and a bit risky. Clearly no OEM can get truly profitable until it’s selling mostly current year products. However, this is a weather driven business and the word “mostly” can swing wildly to include a lot of non-currents.

“There will be very attractive pricing on these limited production 2020’s”. Pricing we’ve seen released in the past couple days appears to validate that statement.

We won’t get into specifics as our readers are both Americans and Canadians which means the numbers are significantly different. You can look them up and evaluate for yourself. The issue of sweetening early order snowmobiles with exclusive pricing, extras and rebates is decades old. We’ll see how this program flies by sometime in April.

Perhaps, here’s part of the answer. After letting it digest you may, as we did, find it confounding. Apparently the 2020 800 CTEC engine gets new cylinders, heads and pistons. The reason for this was not clearly explained.

When you let this simmer in your noodle for a couple minutes this inevitable question arises: If Arctic Cat was going to retool these engine parts (at substantial cost) why didn’t they just drill bigger holes and make the engine an 850? The reality is this: We were unable to quantify the 165-hp claim simply because West Yellowstone is 6,600 feet above sea level and everything feels pretty slow. Add this in: The OEM sponsored Snow Shoot event does not allow head-to-head performance comparisons.

We suspect these might have shown Arctic Cat is on its game with this re-invented 800 C-TEC engine. Just for the record – it did feel quite strong when jumping back and forth between the competitive 850s and the new version of the Arctic Cat 800.

Mark Lester
Mark Lester is Co-Publisher of SUPERTRAX Magazine and a regular Host on SNOWTRAX TV.
Previous articleFull Review of the 2019 Polaris 850 Switchback XCR
Next articleAwesome Snowmobile Products from KIMPEX