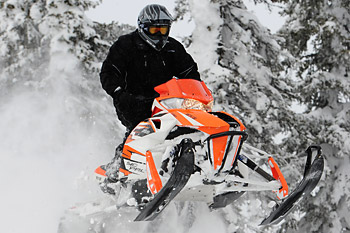 Today’s most powerful 2-strokes are putting out between 155 and 163 horsepower and Arctic Cat’s 4-stroke 1100 Turbo makes a claimed 177-ponies while Yamaha’s Apex delivers 162 naturally aspirated stallions.

This is serious horsepower and with the built-in chassis lightness of many of these sleds, their power-to-weight ratios are crazy good.

We’d be the first to admit that snowmobilers (ourselves included) are pretty much addicted to power but, honestly, you have to eventually ask the question: “How much is too much?”

A few years ago Ski-Doo offered a 1000cc SDI 2-stroke that eclipsed the 175-hp mark and it was a pretty big hit for a couple of years.

At the time Ski-Doo’s other big-inchers (800 PowerTeks) were making power in the 138 range and the 1000 seemed like the gateway to big-time muscle.

Now with an E-TEC 800 putting out a pretty honest 162 in a way lighter package, we wonder if the maximum 2-stroke power ratio has been reached.

Then there’s those turbocharged Arctic Cats! These extremely durable engines can be amped up to almost 300 reliable horsepower if you tweak the turbo system.

Yamaha has long been turbocharging Apexes and Nytros and, with mods, you can get these engines up into the 250 to 300 range, too.

This is crazy power but whenever there’s a demand, the OEMs seem to step up their game and meet their customers’ expectations.

Can we even be so bold as to suggest that someone may come with a from-the-factory turbocharged sled that makes over 200 ponies?

It seems almost ludicrous, but we run out of fingers and toes when we count up the people we already know who would put greenbacks down to get a sled like this. Hmm.