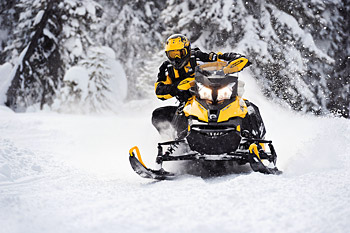 Believe it or not, in less than a month Supertrax will be checking out the 2014 snowmobiles.

The manufacturers’ annual new-sled introductions in Minneapolis happen on January 24 and we’ll be getting a good look at everything that’s new for next season.

In the next few weeks we’ll be coming online with our best guesses on some of the things we may be seeing from the Big 4.

Here’s some guesses on what we think Ski-Doo may be up to:

With last year’s intro of the XS platform to replace the XP, we think Ski-Doo is definitely working on a new body shell to house, possibly, two new 4-strokes.

The new bodywork will have XS-style gauge placement and a storage compartment behind the windshield. Wind protection and windshield choices will be warmer and more efficient.

rMotion will be standard issue on all models with this plastic, but the biggest thing will be its redesign to accommodate more space for multiple throttle bodies for its 4-TEC and 4-TEC II engines.

As it is now, the XR’s space limitations pretty much paint Ski-Doo into a corner with the number of throttle bodies it can use on the big 1200 triple. A redesign would provide better airbox and intake runner routing to enable a higher horsepower naturally aspirated 4-stroke (160-plus hp, likely based on the 1200) to be used.

Likewise we wouldn’t be surprised to see the current 1200 modified to eliminate throttle lag and maybe even upped a few ponies to make it even better.

There’s a lot of Ski-Doo customers who are singing the praises of the 130-hp 4-TEC and many of them are converts from 800 2-strokes. If you’ve ever ridden the 4-TEC you know how torquey it is and how it delivers hyperpower thrust.

It just makes sense Ski-Doo is making plans to dole out even more of that good stuff.

XS Bodywork Across the Board & More

We think 2014 will see the end of the XP-bodied 2-strokes we’ve all known and loved since 2009. It just makes sense Ski-Doo will normalize as much of its model line as possible into the newer XS platform to raise efficiencies of manufacture.

This also may herald the use of electric start on more models as Ski-Doo is showing some pretty determined leadership toward making all snowmobiles with ES in the future. We say: Great!

Another area we may see Ski-Doo normalizing is rMotion. We’re pretty sure there will be more models featuring this ground-breaking skidframe design in 2014 and we wouldn’t be surprised to see a touring sled version of rMotion replacing the current remote air-suspension system currently used on the GTX and the GSX . This would reduce the costs of these sleds and as far as we’re concerned not diminish their ride quality one iota.

We’re only guessing here, so this is one we’ll put out there: We think there may be a new front end design coming for the new XR.

Trust Ski-Doo to be thinking ahead, and if the market for hyper powered sleds is opening up for 4-strokes we think this platform might be the forerunner of a new style A-arm setup that works really well with the extra weight of a 4-stroke.

Let us know what you think.