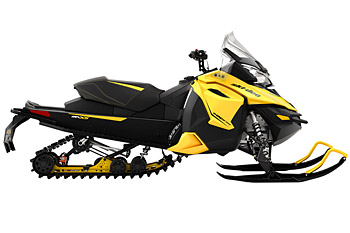 Ski-Doo looks at the snowmobile market from a slightly different perspective than its competitors.

It was explained to us this way: The 4-stroke market has a gap in it – around 90-100-horsepower – and the company thinks there should be some product in this as yet undefined segment.

We’re not sure if Ski-Doo is onto something here in terms of the 90-hp zone turning into a saleable segment. However, the product it’s positioning in this new category is as good as it is techy.

The 900 adds exactly 30-hp (and one cylinder) to the equation, making each cylinder responsible for 30 ponies.

The most intriguing piece of tech on the new 900 ACE is its first-in-biz drive-by-wire throttle. Yep, just like your car, truck or SUV, there’s no throttle cable on the ACE Nine.

A rather large and unusual-looking throttle block contains a rheostat that sends proportional signals to the engine ECU then to a servo-motor that controls the engine’s single throttle plate.

There are some interesting things going on here, not the least of which includes three separate modes for the throttle plate to respond to the rider’s right thumb.

ECO Mode is for maximum economy and is uber tame. This mode will likely be used more as “newbie” mode for safety.

Standard Mode moves the throttle with a linear and proportional response, maybe a touch laggy at engagement. Oh no, there’s that word, lag! Let the hate mail begin!

Sport Mode (our fave by a long shot and the only way we would operate the 900) bumps clutch engagement by 200 RPM and provides immediate, satisfying tip-in.