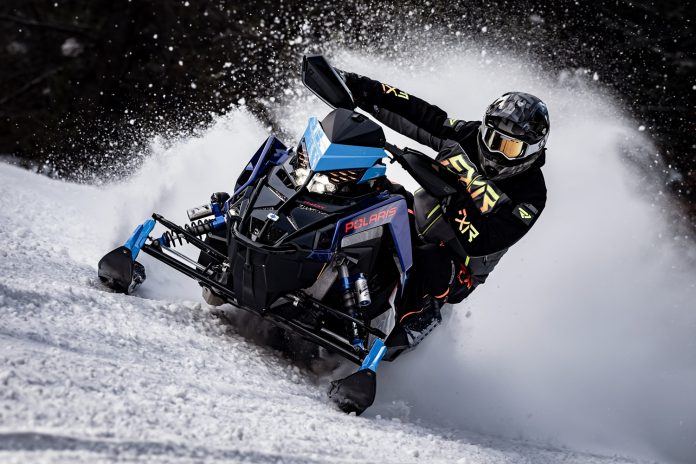 It’s that time of year again when we start speculating what the OEMs will be rolling out for your humble servants (that’s us) to sample at Sneak Peek.

For the record, Sneak Peek is held in late January or early February at a top secret location each one of the OEMs selects annually. It’s not a West Yellowstone Snow Shoot event as each OEMs runs a private party with only select in-sport media invited. As you can imagine, the list of media participants has been getting somewhat shorter the past few years.

So here goes with what we think Polaris may show us at its 2024 Sneak Peek.

We think Polaris will unveil its highly effective, semi-active Dynamix suspension system on at least the Indy MATRYX VR-1. The snowmobile intro of this technology is actually about a year overdue with Ski-Doo, Arctic Cat and Yamaha offering their own semi-active systems.

This technology is not cheap to develop or produce, so expect it to be available only on top-of-the-segment models and only on Snow Checked Polaris models.

We’ve rumored we expect Polaris to take its 4-stroke program (S4) to more models in 20224. However, we think it is not beyond the realm of possibility for the new 1000cc Pro Star S4 to get the Boost treatment.

Think about this: The 1000cc Pro Star engine used in the S4 has been turbocharged to produce 180 HP in select RZR off-road SxS vehicles.

Simply put, that engine can inhale copious quantities of compressed air literally jammed down its throat with nary as much as a cough. Bolting a turbo onto the Pro Star S4 mill can’t be too difficult… can it?

Next issue requiring speculation: The insertion of the Boost 850 Patriot into the XCR platform. We think this is a no-brainer with the ditch banging crowd always looking for more lift-off power on the “approaches”.

While the Boost 850 VR-1 fits nicely into the rider profile it’s intended for, there’s more than just “lake racers looking for a Boost-equipped bump runner”.

The XCR Boost should come with a 137 out back like the VR-1 Boost. A 1.5 Camso Shredder would be practical on an XCR Boost.

Here’s a long shot, but, hey, this is what we do at Sneak Peek time. I think we might see a new standard gauge to replace the long-in-the-tooth PID cluster. Ski-Doo not only upped its deluxe display to 10.2 inches but it improved its “base model “info center for 2023.

The PID does not allow easy access to the settings supporting the new Smart Grip thumb and handwarmers. A new display would surely include improved access to the excellent heaters similar to the S-7.

That’s about it for our Polaris predictions and wishes for MY 2024. Maybe you have a few guesses too so let’s hear it!