Two Sleds Not To Mess With This Year: Part 2 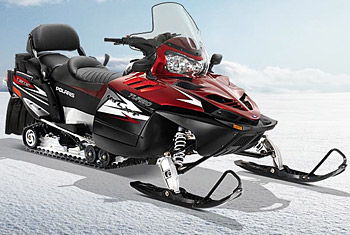 Sometimes 2 plus 2 adds up to five and we can’t figure out the math.

As a camera vehicle we added in a Polaris Turbo Touring. This sled has all the 2-up features including a big seat with a backrest and a 136-inch track. We’ve always liked this sled for its plush ride and nice amenities but have never, ever considered it a performance sled.

Hmm, here’s where the math gets messed up. In a couple of impromptu pulls down the lake – you know, where you can really open these ultra-high performance sleds up without breaking any laws or creating any danger, we noticed not one of them was pulling away from the big Turbo. Asked if the other guys were wide open, they were.

You could argue about whether or not all the 800s’ clutches were fully shifted out and were they all at max top speed, but what really impressed this rider was the acceleration up to maximum shift-out. The Turbo literally catapults the sled up past the digits on its speedometer!

The truth here: This sled not only stays with those 2-stroke hypers from low speed throttle roll-ons (20mph) up into the top three-quarters of its power range, those 800s are playing catch-up all the way to the C-note!

Polaris claims the turbo makes 140-horsepower and has a boost feature that allows it to go to 160 at initial throttle tip-in for about 4-seconds. Once again, the math gets very fuzzy when you’re actually riding it. This is ridiculous behavior for a somewhat heavy, sleeper touring sled.

Is the Turbo an overachiever? You bet it is. Our advice: If you meet someone out on the lake riding one of these and they look at you with an evil grin, let them go. You’re not likely gonna catch them.