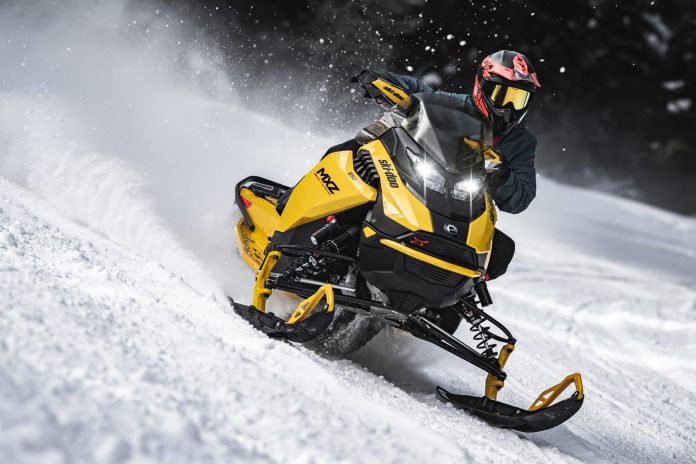 Don’t know exactly how our readers and viewers are feeling about this but I suspect you may be feeling pretty good about the prospect of even more turbocharged 2-stroke trail sleds.

The old adage the upper end of the snowmobile market lives by is still in full vigor: “Nothing exceeds like excess”. Simply put, if one OEM lands a new ride with more power, then it’s never long before more jump in.

We predict precisely this will happen in the 850 2-stroke segment. Ski-Doo does not let anyone mow its grass and the arrival of the 850 Indy Boost is all about cutting grass – Ski-Doo’s grass.

Frankly, we’re a little surprised everyone was surprised at the Indy Boost’s arrival. The deep-snow-targeted development of the Patriot Boost mountain engine probably ran up a large-esque invoice. Taking the Boost package to the trail segment would utilize more Patriot Boost engines than the RMK does in the deep snow market.

Winning! Sounds like the Indy Boost is not only a rocket ship trail sled but the basis of a solid business plan. The development cost of the Boost Patriot engine platform is getting paid back way faster now Polaris slid it into the Indy VR-1.

The question remains whether Ski-Doo will continue to point its turbo-hungry buyers toward the current 900 ACE Turbo R powerplant or will the company slide the Rotax E-TEC 850 turbo used in the Summit into a MX-Z G-5 platform? Knowing how serious Ski-Doo is about meeting its customer’s expectations we have to think there is something 2-stroke, trail oriented and turbocharged in the works.

Before you get your checkbook out, keep this in mind: I’m dealing in pure conjecture driven by decades of experience watching the market leader do just that – lead.

Ski-Doo was adamant two years ago, when the Rotax 850 Turbo was revealed, it would not and would never use the engine in a trail sled. Interestingly BRP was also adamant the original turbo 850 would not be tweaked to increase peak HP. Rather, it would capably maintain claimed HP up to 10,000 feet elevation. One year later, guess what? The latest 850 Rotax Turbo increases peak HP. Hmm?

Can Ski-Doo and Rotax do something similar? You bet your carbides they can.

Mark Lester
Mark Lester is Co-Publisher of SUPERTRAX Magazine and a regular Host on SNOWTRAX TV.
Previous articleQUÉBEC – The World’s Must-Ride Destination This Winter!
Next articleGEN 5 TAKES 2023 SKI DOO BLIZZARD TO THE NEXT LEVEL