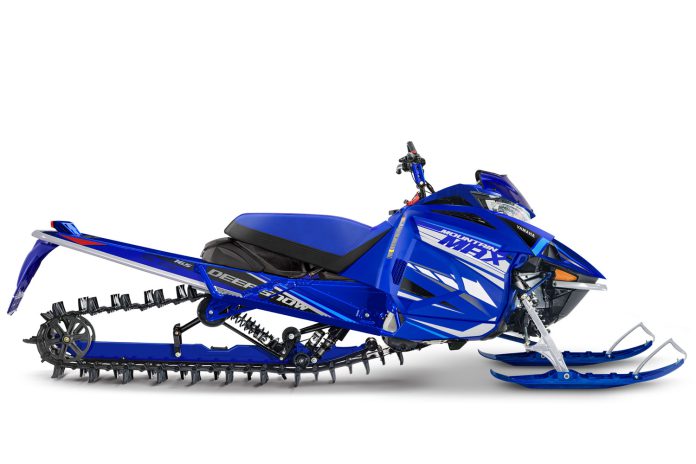 Now that the dust has settled and everyone has had a look at the 2021 Yamaha line-up, we’re wondering where the intro of a line of 2-strokes is going to go with Yamaha down the road.

We’re not so focused on the new Venom (400cc 2-stroke single) line as much as we are on the SDI 800 2-stroke Yamaha is using in the Mountain Max and the Transporter.

BTW: In our opinion, the Transporter 800 is so close to being a Crossover sled – given the fact the industry is going with longer and deeper tracks on sleds like the RIOT, Assault and Backcountry, that the Transporter logo could easily morph into a crossover-adventure hybrid without having to use too much imagination. Certainly, its upgrade in power adds a ton of appeal for Yamaha buyers who want to spend more time off-trail than on.

Getting into the mountain market with a high-tech, lightweight 2-stroke sled makes the Mountain Max super-appealing to two types of buyers: First, the most obvious is the Yamaha guy who has wanted to be an altitude rider the last couple years. The Mountain Max will fill the bill nicely.

The second type is the rider who can’t get an Arctic Cat because he-she didn’t lay down the fresh to get in on an early-season purchase. True, this isn’t a problem now, but in-season, when the Cat offer expires on early-orders, the only Cat-like mountain sled you’ll be able to see in showrooms will be the Mountain Max, provided the Yamaha dealer early ordered some of them for inventory. We think a lot of purebred Cat artists will be shopping for an M-Max then.

Another point is Yamaha’s pricing. So far, the published premium on a Mountain Max is about $600.00 more than the Alpha One. Frankly, this is a bit troubling but if you give it some consideration, you need to remember that Cat is offering killer prices on all of its sleds if you slap down a deposit early.

Since there are no in-season, in showroom Cat sleds available and if Yamaha holds its price to where its intro puts it, the Mountain Max’s price tag may turn out to be pretty reasonable later in the season.

As far as value goes, customers who step up for the Mountain Max 800 will not be disappointed. This is a truly fine snowmobile, well-researched and with some real props against what Polaris and Ski-Doo are offering.

Looks like, if you’re “in for a penny, you’re in for a pound” with the door now opened wide for more 2-stroke Yamahas. We love it!

Supertrax Onlinehttps://www.supertraxmag.com
Check back frequently for new content and follow us on social media!
Previous articlePutting The Ski-Doo Expedition Xtreme To The Test!
Next articleSKI-DOO’S 600R vs 600 EFI SPORT