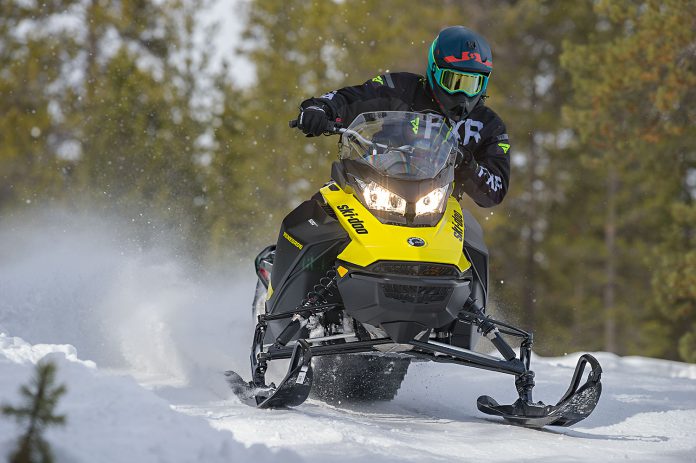 The old adage stating an internal combustion engine is nothing more than an air pump can be graphically illustrated in two new Rotax engines powering Ski-Doo snowmobiles.

The new 600R E-TEC engine arrived two seasons ago as a completely new design producing 125-HP. When we received word of the new 600R and had to sign embargos keeping it a secret, we were surprised Ski-Doo didn’t write chapter two of its “How to One Up the Competition” novel.

What do we mean? The writing was clearly on the wall after Ski-Doo introduced the 850 and smashed the 800-class mold. Why didn’t they drill bigger holes and make the 600R a 650R? Obviously, the rest of the story is history.

BACK TO OUR POINT

The new 600R E-TEC engine employs every trick in the Rotax 2-stroke book to deliver a pleasing surge of EPA compliant thrust. The engine is a pleasure to squeeze on tight trails or big pulls up Kevlar Lake.

A new, lighter and rationalized E-TEC injector is used along with new E-RAVE exhaust port modifiers. The engine’s durability and anti-wear properties are improved with an exotic cylinder coating process that sprays the aluminum cylinders with a super hard and durable liquefied metal that’s finished by an equally exotic polishing regimen.

The 600R, while closely mirroring the 850, does not have a 2-piece forged crank. Rather, it uses a conventional, pressed together “built” crankshaft. The new 600R idles smoother, delivers low-end power more efficiently and transitions to shift RPM virtually seamlessly when compared to the Series III 600 E-TEC it replaced.

The engine has been a hit since its intro. Keep in mind, the 600 class is still the most prolific engine size in the biz.

Remember what we said about an internal combustion engine being an air pump? That is undeniably true and proven by the way the newest 600 using EFI facilitates the 600R E-TEC platform by simply altering its ability to inhale and exhale – more commonly stated as its ability to “suck and blow”.

Clearly, the 600 EFI engine is built on the same cases, crank and cylinder castings. The big change comes with the substitution of the complex and costly E-TEC direct injection fuel delivery system.

On the exhaust side of these two engines the exhale differences come into play. The 600R E-TEC uses ECM controlled servos to activate the RAVE port modifying “guillotines” in response to a jillion inputs into a highly complex 3-dimensional ECM map.

Essentially E-RAVEs compliment E-TEC’s precision injection of fuel and assist the direct injection system by holding unburned gasses in the combustion chamber. As the E-RAVEs move up and out of the exhaust port, the engine is able to pump more air for increased high RPM power.

On the exhaust side of the 600 Sport EFI engine there’s no exhaust valves – period. The 600 EFI engine relies on a tuned expansion chamber to hold up unburned exhaust gasses using reverse pulse waves resonating back to the fully unrestricted exhaust port.

However, it must be noted both the volume of incoming fuel and air and the volume of spent exhaust gasses leaving the 600 EFI are dramatically reduced when compared to the 600R E-TEC. This is why the 600 Sport EFI delivers 85-hp and the 600R E-TEC produces 125-hp.

I know what you’re thinking – would the 600 EFI produce more power by bolting on 600R cylinders? Let me say this – don’t even think about it! Switching cylinders would require a complete re-mapping of the Sport’s EFI ECM. It Is doubtful the new EFI system could deliver the volume of fuel needed to make a Frankenstein version of the 600 Sport.

The idea of EFI for 2-stroke use is not new. Arctic Cat’s Suzuki 800 twin used a very effective throttle body EFI system for many years to produce heroic power. Just to be clear – EFI isn’t SDI.

Semi-direct injection introduces fuel to incoming air in the transfer or boost port on the cylinder. SDI is currently in use on Arctic Cat’s new 800 twin and Polaris Liberty and Patriot engines including the all-new 650.

Dual Stage Injection (DSI) is used by Arctic Cat on its potent 600 twin. DSI injects fuel on the top of the piston at relatively low RPM and then transitions to injecting fuel both on top and under the piston with the same injector as RPM rises.

That’s all we can tell you about the new 85-hp Ski-Doo 600 Sport engine, for now. One question we are poised to answer is whether or not an aftermarket expansion chamber could increase the 600 Sport’s output. Stay tuned.