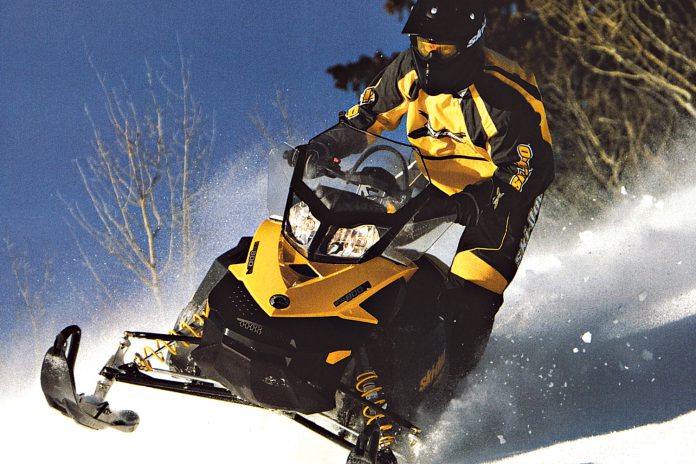 The trend toward weight reduction had begun to a limited degree in the late 1990s and throughout the ’00s the OEMs were talking a good weight game but it was going slowly as far as big, bold leaps toward significant weight reduction were concerned.

One day in late 2008 a heavy package from Ski-Doo arrived by courier at Supertrax World Headquarters. Inside were barbell weights totalling 50-lbs. What the…?

A note was attached announcing that this was a demonstration of how much weight Ski-Doo had taken out of its newest snowmobile, the MX-Z XP.

When we finally got to touch an XP – and ride it – we were pretty amazed at how effective its boasted weight reduction was at improving the overall demeanor of the sled.

Ski-Doo shouted from the rooftops it was by far the lightest snowmobile ever and it worked immediately. Suddenly buyers of all brands were comparing their potential purchase to a Ski-Doo XP.

The bar was set and there was no returning. Going forward, every OEM was forced into dreaming new ways to make their products lighter. Naturally, when things are lighter, power-to-weight ratios get better and the fastest-sled wars heat up. The whole XP deal started a new way of thinking in the snowmobile industry!

Supertrax Onlinehttps://www.supertraxmag.com
Check back frequently for new content and follow us on social media!
Previous articleFirst Look at The 2021 Yamaha Snowmobiles!
Next articleTHE GOLDEN DECADE: TRIPLES TO TWINS