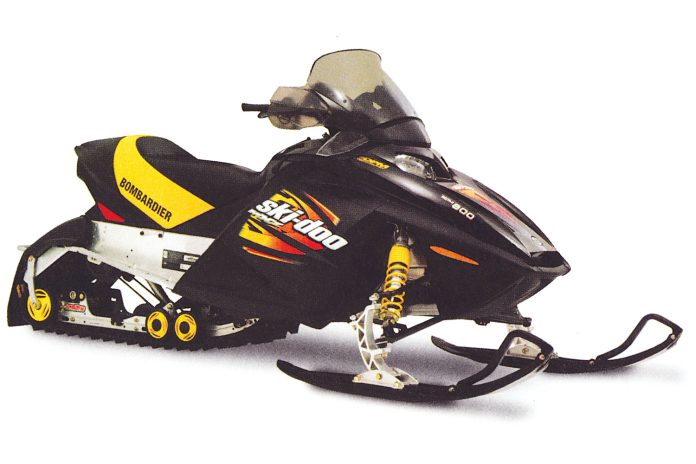 No other event more vividly describes the Golden Decade than the advent of Ski-Doo’s REV snowmobile. First introduced in model year 2003, the earliest version of the REV looked incredibly different than anything ever seen on snow. Doubters went crazy proclaiming it would never be successful.

The REV positioned the rider far differently than before. The seating position was higher and moved forward about eight inches, the handlebars were situated more forward and the rider sat with his back upright and knees bent at 90-degrees – almost exactly like sitting on a motorcycle or ATV.

The intro of the REV was a bold, gutsy move captained by BRP CEO, Jose Boisjoli. The only known fact limiting Ski-Doo’s exposure in the final decision to go all-in with the REV was that the new layout really worked!

With the rider seated forward, handling and ride were noticeably better, the rider was much more comfortable and sitting-to-standing transitions were far easier than with a sit-down sled.

Saying it was one thing, but Ski-Doo had already proven how much better the REV’s layout was on snocross tracks for a full season before production models entered showrooms. In those few months of competition, the REV proved unbeatable and those who sampled it vowed to never go back to conventional rider positioning.

Within three years the whole industry moved ahead with rider-forward snowmobiles in nearly every class.