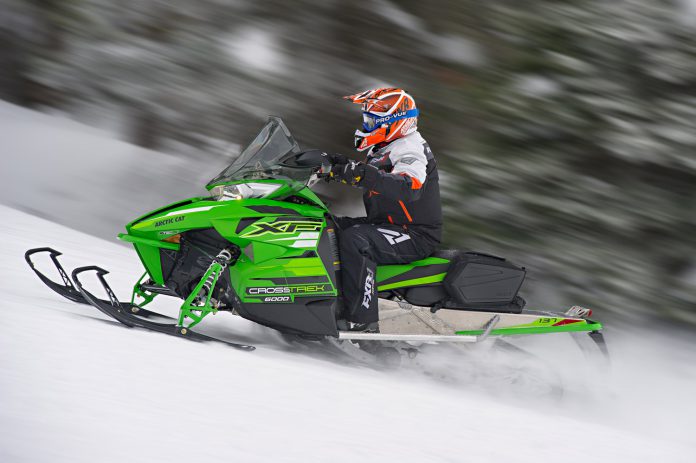 Slide-Action could be called a conventional shock-in-skid suspension but it incorporates some suspension tricks Cat has initiated over the years.

It uses a front arm coil-over shock and a rear arm torsion spring and shock combo. Slide-Action is fully coupled, so both the front and rear of the rail can respond to bumps – or both together depending on where the coupling moment is adjusted on the couplers themselves.

Kirk Hibbert and Cat’s engineers designed the Torque Sensing Link a number of years ago and it has since been adopted by the competition. The TSL levers at the rear arm upper pivot points are designed to respond to the increasing track rotation as acceleration increases, actually pushing the rear of the skid down harder onto the snow surface increasing traction and allowing maximum travel.

This race-developed trick works best when you’re driving over moguls at high speed with the throttle wicked up. Because the skid is pushing downward, geometric forces are allowing the skid to absorb the hits in the sweet spot of the suspension’s travel without bottoming out.

The second trick is the front arm’s sliding action – another innovation invented by Cat. Under acceleration, the front arm slides on its lower pivot allowing the arm to get either longer or shorter in accordance to rotation speed and resists track deflection – a particular challenge with all ultra-long travel suspensions.

Cat has done a ton of work with shock calibration the last couple of years and was first to suggest to FOX a simpler compression damping adjustment system called QS-3. These shocks, in all forms, are the cream of the industry but Slide-Action really is a great skidframe no matter what shocks you’re using. It bridges the gap between high performance ride quality and plush trail response without compromising either.