SO WHAT’S UP WITH YAMAHA? 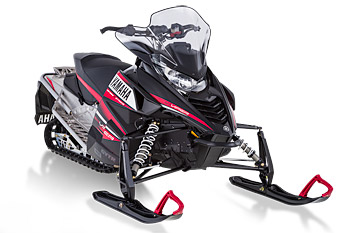 If you’ve got your pulse rate settled down after the big news about the 2014 Yamahas, you’re probably asking what the heck is going on with this marriage of two very significant players in the snowmobile industry.

First thing: Both Arctic Cat and Yamaha swear this is neither a marriage nor a partnership, a buy-out, a sell-out or a harbinger of either. Yamaha and Arctic Cat are still separate and individual entities and there has not, nor will there be, any transfer of shares or holdings between the two companies. This is solely a manufacturing agreement that has significant benefits for both companies.

How? By building Yamahas in TRF, Arctic Cat gets to amp up its production numbers and can benefit by economies of scale when dealing with suppliers. It’s just a lot more practical to build a whole bunch of something instead of a smaller number.

On the other hand, Yamaha can make a quantum leap into the next generation of its products without the need to invest mega-bucks in research and development as it would with a completely new from-the-ground-up platform.

Note: Yamaha is still making a significant investment in R&D with the Viper but its investment is still millions of dollars less than it could have been.

Unless you haven’t noticed, the Rec industry, along with every other one, has been going through a recession the last five years and much of the money invested in survival by all companies has come from cuts to R&D budgets.

Does this look like Yamaha is getting out of the snowmobile business? Frankly, we can’t see any less commitment to the snowmobile biz than Yamaha had before. The fact is, this giant-step, unconventional approach is far more risky than anything we’ve seen in the recent past from any Japanese company.

Think about it this way: Would it have indicated a stronger commitment if Yamaha had continued to simply build nothing but the same sleds it did before? That line of thinking does not hold water because the Viper is going to guarantee a huge increase of traffic into Yamaha dealer showrooms and will answer many of the weight-issue questions customers have been asking for several years.

Suddenly Yamaha dealers will be offering a completely new line of sleds that cover the bases in categories Yamaha hasn’t been competing in.

Yes, some short-term thinkers will swear off the brand and simply refuse to accept the Viper as a “real” Yamaha.

We’d like to suggest for every one of those individuals, there will be double who will accept and love this change of direction.

Kent Lester
Previous article5 THINGS WE DIG ABOUT YAMAHA SLEDS
Next articleWhat’s Ski-Doo Up To For 2014?