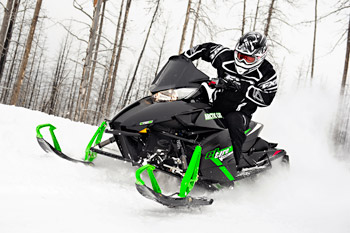 Clearly, SnowTrax is impressed with the 600 “slot injection” motor. SnowTrax co-host AJ Lester, added: “Fresh thinking displayed by Arctic Cat’s engine team has produced not only the new benchmark for power and acceleration in the 600/125-hp segment but an extremely fuel efficient and EPA-clean motor at the same time. The benefits over conventional injected engines are genuine and much more than brochure hype”.

When the snow dust settled after more than 30,000 miles on 21 different snowmobiles in the SnowTrax /Supertrax fleet, the verdict was in: 2014’s most impressive sled is Arctic Cat’s 6000 El Tigre!

SnowTrax Television is produced by Supertrax Media Inc. and airs 13 times a season with a viewership of over 3.5 million snowmobilers. SnowTrax airs on the Outdoor Channel in the US as well as OLN and Wild TV in Canada and a growing number of affiliates in Northern Europe. Supertrax Media Inc. also produces the sport’s most circulated enthusiast publication, Supertrax International Magazine in both the US and Canada.