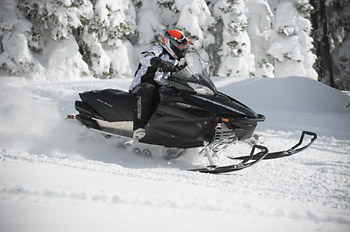 Yamaha’s development of the EPS system for ATVs has been a huge success and copied widely in that industry.

Since the company was first to market it on 4-wheelers, it seemed a logical progression for the engineers to add it to a sled.

The fact is, the idea was presented to the inner sanctum of Yamaha product people several years ago but was shelved to make way for other projects.

It wasn’t until the unparalleled success of the EPS system on ATVs was firmly established that the brass gave the nod to adding the technology to the Apex last year.

Turns out, EPS has been a revolution for Yamaha and makes a substantial improvement in the way the Apex handles.

If you’ve been a Supertrax reader very long you know we’ve harped unrepentantly about the darting issues all Yamaha snowmobiles have struggled with this decade.

For several years we’ve been recommending owners change either the stock skis on their Vector, Apex, Nytro and Phazer models to less aggressive aftermarket units or go to a dual carbide skag setup to get a handling improvement and reduce the tendency of the skis to react to ruts in hard-packed snow, making them twitch right and left.

Yamaha had not been ignoring the issue but was working on methods to improve the handling while skirting legal issues on about a bi-jillion ski patents existing in the industry.

The engineers feel EPS is not a mere band-aid solution to a problem that has existed but constitutes a change in direction for snowmobile design.

Keep in mind, EPS has become the single most desirable feature on an ATV and nearly every major manufacturer in that business now offers a comparable version of it.