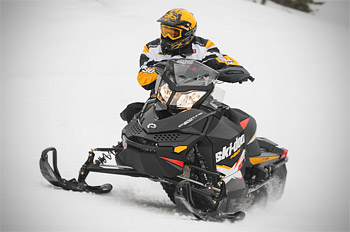 True rising rate? Whatever. In our books it’s all about the ride.

We discovered on our day-long blasts at both insane speeds and trail cruising velocities, the rMotion is competent at both disciplines with little, if any, adjustment required.

To date, we haven’t seen a suspension with such a broad range of plush impact response.

The secret lies in a number of elements. Most notably, in a late coupling moment combined with a rapid rise in shock rate as the skid compresses.

With the coupling moment moved later in the suspension’s stroke there’s another element of rideability added the current SC-5 cannot produce: Weight transfer on exit from corners.

For the past dozen years, weight transfer and resulting inside ski-lift on turn exit has been controlled by hard coupling, producing a level and flat response to turns.

Uncoupling the skid would, at first glance, infer the sled might stand up and wheelie on exit, increasing inside ski lift.

Why doesn’t the rMotion produce this response? It’s all about the skidframe’s front (torque) arm.

The rMotion uses the longest front arm we’ve seen on a sled. So long is this torque arm it actually intersects the rails at a point that’s more than 50-percent back from the rail tips!

This long front arm provides an amazing degree of control over ski-lift, control the pilot can modulate with his or her right thumb.

You can make it pull heroic wheelies, but only when you want them. This means the rMotion gives a vastly improved small and big bump ride, with less coupling, without increasing ride height, with more weight transfer and with the ability to control the weight transfer more precisely.