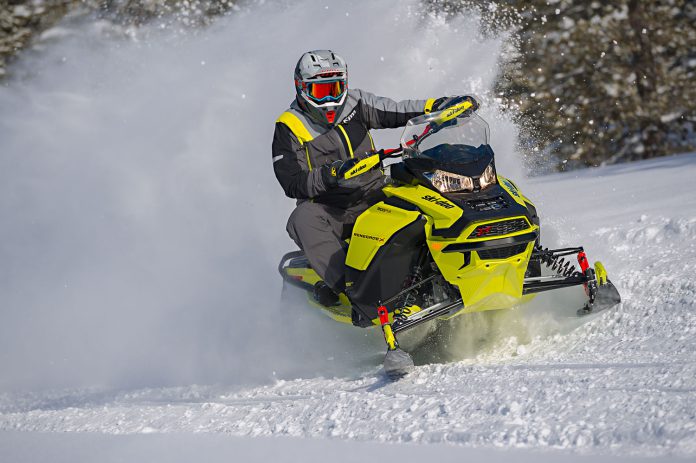 When the word “turbocharged” comes up in snowmobile conversations these days, it always seems to imply maximum horsepower – no compromises, no exceptions.

This fact is no more evident than when Ski-Doo introduced its 900 ACE turbo last year. There was much conversation about its 150-hp output being inadequate compared to the 180 to 200 range the SideWinder and Thundercat were delivering.

We recall conversations asking: “Why would Ski-Doo put all that work into building a turbo sled when it’s already going to be overshadowed by the competition?” Another comment was, “Who’s going to want a turbocharged sled making 150 horses when you can buy a lighter 2-stroke that makes 160-plus?”

Good questions – and completely logical. However, a year later and the sales numbers seem to indicate there are a lot of snowmobilers who want a turbocharged sled making power in that range. The 900 ACE Turbo has been a huge success and looks like it’s here to stay.

To put this conversation in perspective, you need to look at where turbocharged snowmobiles have come from. Back in 2004 when Arctic Cat first introduced the T660 turbo, that tiny 3-cylinder engine only produced 110-hp from 660ccs.

Those specs sound pretty anemic compared to what is offered these days, but the truth is, that sled was an incredible performer and was an absolute blast to own and ride.

Some of its success was tied to the throttle lag it had and how much fun it was to feel the surge from that big boost of turbocharged air compression when you laid on the throttle.

No, we’re not suggesting sleds need turbo lag to be appealing but that definable surge from about 60-horsepower up to 110 was a real trip and made the experience fun!

A couple of years later, Polaris came out with a turbocharged 750 twin and it, too, was a ton of fun to ride. This one used an “overboost” feature that took the engine from 135-hp up to about 160 for a very brief time as the turbo’s boost was raised for quick acceleration.

The fact is, those two sleds were extremely appealing and had a ton of pull in the marketplace.

We’re wondering if turbocharging Yamaha’s old 500cc Phazer 4-stroke twin might produce a stir in the market, too.

That engine made about 80-hp stock and even if it was boosted to somewhere around the 110-hp mark, would there be a lot of riders who wanted a lighter 4-stroke that made that kind of power? We think there might be!