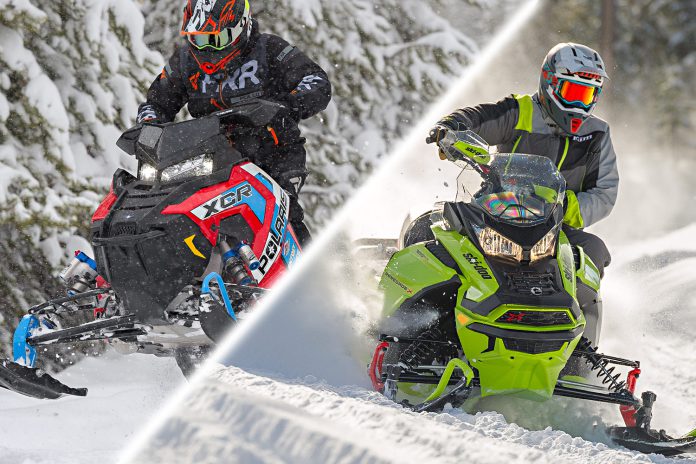 Ski-Doo hasn’t missed a beat since the original 2003 REV hit the ground and stole number one sales and market share laurels from Polaris. Up to that time Polaris had held nearly a two-decade-long stranglehold on snowmobile sales market share.

In the late 1990’s, Laurent Beaudoin, then Top Gun of Bombardier (which included the aviation and rapid transit businesses at that time) and son-in-law to the iconic J. Armand Bombardier, had made it clear he wanted Number-One status back in the Ski-Doo camp.

As the story goes, Bombardier Recreational Products CEO and powersports visionary, Jose Boisjoli knew he needed two things to happen to satisfy Laurent Beaudoin’s call to arms and to elevate Ski-Doo back to leader status – something the company had lost in the early 1980s.

First, he knew he needed a game-changing snowmobile. The REV platform was that game changer, so much so that over the next few model years every OEM moved to imitate the REV’s now industry-standard “rider forward” ergonomics.

For reason’s too complex to delve into here, Polaris didn’t have the “next big thing” in its repertoire and was slow to respond to the arrival of the REV. Back in 2003, Boisjoli got his “two things” and, as they say, the rest is history.

In case you hadn’t noticed, Polaris has kept its head down while on a mission to increase market share. The company’s passion for these laurels appears to know no bounds.

Polaris has innovated engine designs, engine technology and has re-invented snowmobile suspension twice in the last ten years. The company has identified competitive areas it can “own” as Polaris distinctives, and bolstered those strongholds on an annual basis.

To see how far Polaris has come this decade is doubly remarkable, considering it does not have a 4-stroke snowmobile. We believe this may be about to change soon. Consider this: Ski-Doo sells more 4-strokes than Arctic Cat and Yamaha combined. That’s a lot of snowmobiles!

My headline question was “Who is the competition?” I think it’s safe to say Polaris is Ski-Doo’s competition and even though you’ll never hear those two OEMs complain about gaining market share from Arctic Cat or Yamaha, it is clearly double-dipping when one of them gains it from the other!

At this point Ski-Doo knows it cannot take its enviable leadership position for granted. A wise marketing Guru once said to me: “Number One is not a destination, it is a journey!”