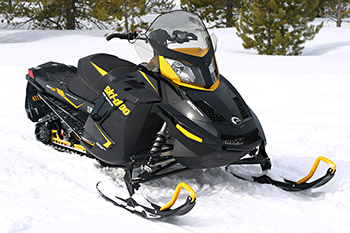 If we’ve been asked once we’ve probably been asked about 100 times what Ski-Doo is likely doing to its XR 4-stroke line-up.

It’s especially telling that the 2015 XR Ski-Doos have remained unchanged this year while the company’s XS models all got a front end upgrade to RAS 2. So far there’s no factory upgrade kit available for used XRs to convert the front end to RAS2 the way you can with an XR or XS model.

We think the reason for this is that Ski-Doo has a completely revisited XR waiting in the wings for MY2016. We’re thinking it might be an all-new chassis using front end castings similar to the Polaris AXYS and more weight reduction to maintain the company’s bragging rights about lightest weight.

Other hints the temperature is changing have to do with Ski-Doo’s 1170 4-TEC triple. It’s no secret Ski-doo wants to shed the “throttle lag” issue that has plagued this engine (even though it hasn’t hurt sales or customer satisfaction one iota) and Ski-Doo already has the wireless technology that cures the problem on its ACE 4-strokes. It’s almost a no-brainer the company would, at the very least, move to wireless throttle on any new XR.

Here’s another angle: Waiting in the wings is a fully developed 1330cc ACE 4-stroke from the Spyder – with, guess what – wireless throttle technology. Using this engine in a new, lighter XR would mean the engine could be naturally aspirated (no turbo), eliminate throttle lag and make more horsepower. We don’t need to tell you how fuel efficient and EPA clean these ACE engines are.

Yes, the 1330 ACE would be dimensionally larger than the ACE 900 – but may not be larger than the current 4-TEC. Power could be amped up into the 150-160 range and would unquestionably keep all those converted Ski-Doo 4-stroke customers interested in upgrading.

With Yamaha and Cat’s 4-stroke business showing signs of dominating right now, a completely new XR would turn the spotlight on Doo full-force.

Kent Lester
Kent Lester is Co-Publisher of SUPERTRAX Magazine and a regular contributor to this website.
Previous articleCAT’S NEXT TURBO
Next articleWHO’LL BUILD THE NEXT SNO-SCOOT?