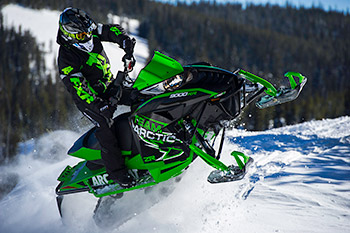 Being the Turbo-leader is one of those things that builds tremendous brand loyalty with a very high-spending segment of the sport – a segment other OEMs would love to get the attention of.

The downside is the warranty issues often associated with offering an all-out 100-percent vehicle like this. Cat seems to have managed this pretty well the past few years.

Cat’s biggest problem with the 9000 may be that it’s a bit of a one-trick pony at the end of its appeal zone. At 177-hp, its 1056 Suzuki-built twin is essentially the same as it was three years ago and there’s not a lot of incentive for buyers to buy a new one that is the same as the one they’re riding.

If you’re Cat, you’ve got to be looking at ways to stir in a lot more sizzle and build something that will bring more riders into this upper echelon category – or even get existing Turbo owners to trade up. The answer may be in turbocharging the 1049 Yamaha triple already offered in the 7000 Series.

You’ve probably seen Yamaha’s ads offering an aftermarket turbo kit for the Vector and we’re wondering if this isn’t some kind of omen both companies are testing the waters to see if consumers would like a production Cat or Yamaha sled with a 1049 turbo.

We think this is the ideal answer, certainly for Arctic Cat who owns the market segment and will eventually have to use a different engine supplier than Suzuki, but also for Yamaha who eventually will need a replacement for the aging Apex. We’ve test ridden this set-up and have to admit – it’s pretty impressive.

Cat is THE go-to turbo company with more experience than anyone else building reliable, strong-performing turbocharged snowmobiles since the early 00s. Furthermore, Cat has been busting the horsepower barrier compared to all other competitors for a long time.

Think about a production 3-cylinder turbo with a sweet exhaust note and smooth-spooling, multi-cylinder power – maybe around 180 or so stallions.

Get your blood pumping?