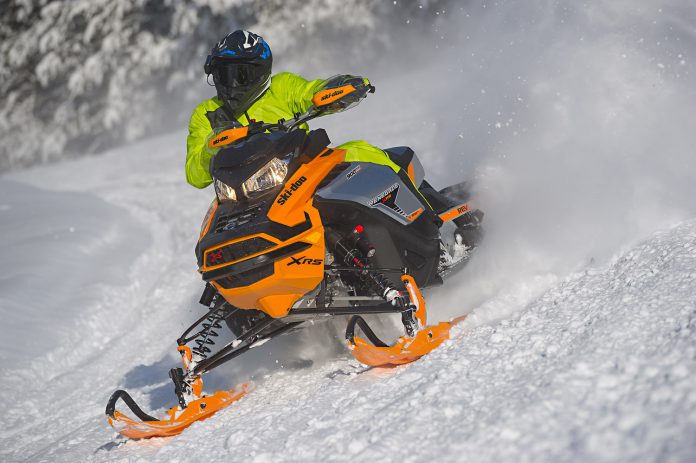 We’ve been accused of being completely Ski-Doo-biased because we didn’t poo-poo the new Rotax turbo for making less power than a Yamaha or Cat turbo. Well, as Rowdy (Kyle) Bush says: “Haters will be haters”.

The idea behind the new turbo was to give the hordes of now-deleted 1200 4-TEC 4-stroke owners a place to put their money when they decided to move up. The 4-TEC made a conservative 130-hp and mountains of torque – and yes, was a potent, much-loved powerplant.

So, logic would say: “Why spend all that money, design all that complexity and make the consumer spend more money to get a jump of 20-horses?” Good question.

We think there’s a bigger picture here and you need to look a couple of years into the future to understand it.

This engine and turbo combo already makes over 170-hp in the off-road world. Yes, the production Maverick X3 uses the same engine with an outsourced turbo (the snowmobile uses a Rotax-built one) to deliver a claimed 173 ponies.

As you know, when it comes to turbochargers, to make big lumps of increased power, it’s not much more complicated than increasing boost and doing some mapping changes. Do you really think Ski-Doo engineers haven’t already been experimenting with doing just that?

So, if you’re Ski-Doo, why not lay all the cards on the table and come with the biggest gun possible from the outset? We think there’s a place in the ‘Doo brochures for a conservative turbo (150-hp) and a no-holds-barred turbo (180-plus) sometime in the future. Maybe Ski-Doo sees it as two separate markets – and there’s a lot of sense in that premise.

Many high performance buyers aren’t interested in having the ultimate, king-of-the-hill rocket ship lake racer that may be compromised in other areas. The 150 Turbo makes sense for those buyers – and, no, they won’t feel ripped-off because they got passed by a Yamaha on the lake.

Furthermore, we don’t think this new SD turbo constitutes Ski-Doo’s way of using consumers to “test” its new product. We see this a well-thought-out strategy intended to change the marketplace. Wait, has Ski-Doo ever done that before?