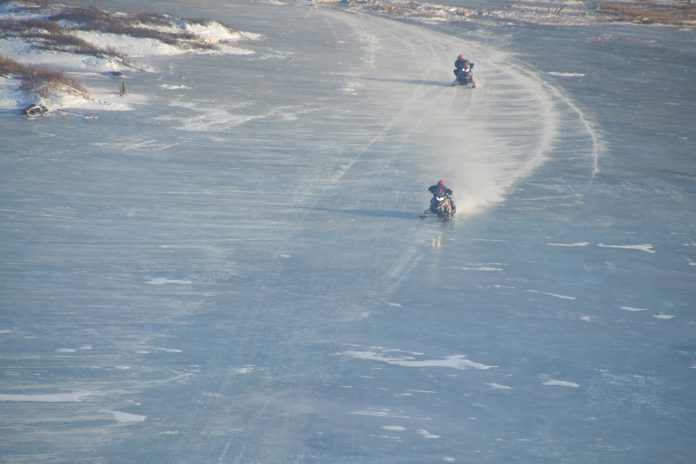 Iron Dog Inc. has selected John Woodbury to be the executive director of the “World’s Longest, Toughest Snowmobile Race.”

Now in its 36th year, the Iron Dog attracts some of the best snowmachine athletes in the nation, who compete for cash and prizes as they navigate some of the toughest terrain in the state.

The Iron Dog Pro Class starts Feb. 17, 2019 on Big Lake and finishes Feb. 23 in Fairbanks. Racers travel more than 2,000 miles from Big Lake to Nome, then to the Fairbanks finish.

Woodbury is a lifelong Alaskan who has followed, reported on or participated in the race since its inception in 1984. He has run the Trail Class twice as part of the Iron Dog media pool, and has also covered the race via airplane. That coverage from land and air has allowed Woodbury to visit every checkpoint and gain unique insight into the workings of the Iron Dog race, and he’s made good friends along the way.

“Some of my best experiences as a journalist have occurred while covering the Iron Dog,” Woodbury said. “The checkpoints are filled with enthusiastic fans who are beyond generous with their time, their housing and their spare sled parts. But, I’ve got to say, the highlight in every checkpoint for me has been the folks you meet…and the delicious food they provide as the racers roar through. I’ve gained friends – and pounds – at every checkpoint.”

Iron Dog’s continued success as a legacy event in Alaska is due to the passion of its fans, supporters, sponsors and racers, Woodbury said.
“The thing about the Iron Dog is, if you already know about it, you love it. If you’re just learning about it, you’re going to love it,” he said. “It’s an event that is charged with the intensity of high-speed racing and tempered with chess-like contemplation. It’s a rollercoaster of emotions played out in a minefield of backcountry Alaska. You can’t help but become absorbed with the race.”

Woodbury said he plans to build on the passionate support base, and tap into the experience of the board.

Also new for the 2019 Iron Dog are a fresh slate of new board members. With four members recently elected to the board of directors, there is a solid mix of institutional knowledge and fresh new ideas, said Iron Dog board President Jeff Johnson.

“Iron Dog has been fortunate to have a stable and decisive board of directors for decades,” Johnson said. “There’s nothing more advantageous than surrounding yourself with experts in their fields who are willing to sacrifice their time and energy to create and maintain an event such as Iron Dog.

“Thanks to all the sponsors, volunteers, and fans who support Iron Dog,” Johnson said. “Your financial resources, endless hours of work and support are essential and appreciated.

“The board is excited to bring John on as our executive director. Having worked with him in the past, the board was confident that John was the right person to lead Iron Dog into the future,” Johnson said. “Thanks again to all the volunteers who help put on such an amazing race. It’s going to be another exciting year for Iron Dog.”

Woodbury owns Alaska Adventure Media, which publishes Alaska SnowRider and Coast magazines, among other titles. To focus on the Iron Dog executive director tasks, he has put those two publications on hiatus until May.