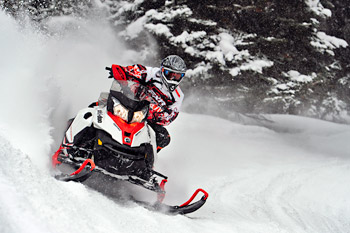 Ski-Doo equips all Renegades with a 137-inch track. However, depending on where you shop in the crowded Renegade profile, track width can vary from 15 to 16 inches.

These variants can produce ground pressure as good and often better than some 141 and 144-inch sleds.

Ski-Doo has updated the Renny (except the Sport) this year with its all-new XS skin. This fresh bodywork is more functional than the former XP skin and delivers benefits beyond better looks.

You now get vastly improved clutch cooling with better air management and a unique modular belt guard (only on XS models, not XR or XP) that carries the spare belt and a small tool kit.

Underhood access is improved for plug changes and minor service. Most important is the way the XS channels air around the pilot. There’s a tangible improvement in warmth here, even with the standard low windshield.

Trail riding sensations on the Renegade are the top-of-class as a result of Ski-Doo’s revolutionary shock-in-skid rMotion suspension out back.

We strongly believe Polaris’ Pro-Ride is the reason rMotion exists. When Polaris introduced the rising rate Pro-Ride setup five years ago the company claimed it was impossible to deliver true rising rate response with a shock-in-skid suspension.

Also, Pro-Ride presented the rider with the ability to adjust spring preload and rear shock damping without putting the sled on its side.

Not coincidentally, these two issues are centerpieces of the rMotion’s design.

Read the rest of this story in the upcoming issue of Supertrax, available December, 2013.