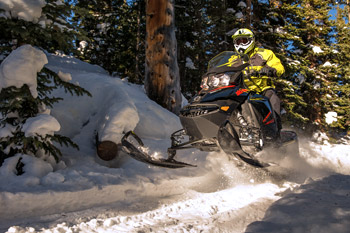 We’ve been reading your online responses to the 2015 Ski-Doo intro we recently posted and want to reply to some of your comments and questions.

First, there were some responses that showed disappointment with Ski-Doo’s seemingly “mild” new model selection this year. Once again, we need to underscore how difficult it is and how long it takes for major engine and chassis changes to filter down through the process of validation until they are deemed suitable for public consumption.

Yes, we believe Ski-Doo is working on some very big changes within the next two years both to its engine line-up and perhaps even an all-new chassis platform (now that Polaris has come out with the lightest sleds ever).

But lets address the biggest changes this year – and it’s especially pertinent now that we’ve had a week to sample these sleds in West Yellowstone, Montana.

You’re not going to believe us when we say this but here goes: The new RAS front end Ski-Doo has added to its XS models (and some XRs) is a very, very, very, very big change to the way the MX-Z and the Renegade work.

The change was accomplished by spacing the upper and lower control arms about 12mm further apart and adding new spindles. This affected the sleds roll center (raising it) while maintaining a low center of gravity.

You immediately notice this change when you ride the sled aggressively on trails. The front end stays planted and there’s virtually no push or understeer at any point.

Ski-lift is obliterated and we detected no darting of any kind in both the early morning hard and frozen snow conditions in Montana and in the later-in-the-day softer snow when the temps were warmer.

We cannot underscore deeply enough how much more confidence this inspires in the XS chassis when you’re riding! It also makes for a beautiful marriage with the rMotion skidframe.

Another comment. We were a bit floored when we found out Ski-Doo was moving away from the 16-wide tracks it has perfected on the Renegade.

The combo of the RAS front end and the narrower track (15-wide now) allows the 2015 Rennie to respond to handlebar inputs instantly and carve like a Ginsu.

The handling gap between a Renegade and an MX-Z is almost eliminated and the 137-incher would be our preference, unequivocally.