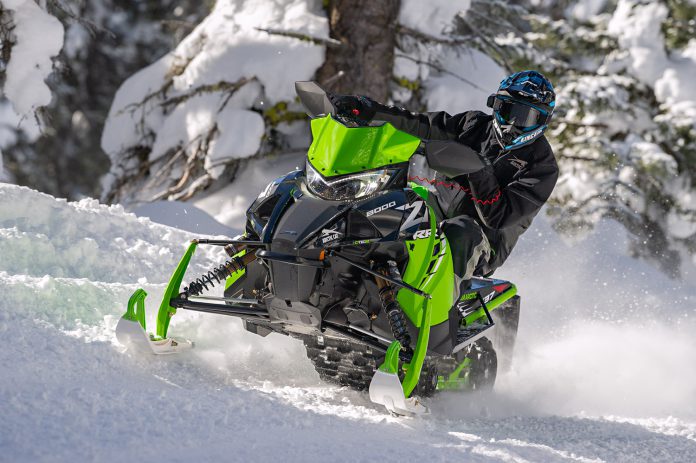 The topic was the ongoing legal battle between Ski-Doo (BRP) and Arctic Cat (Textron) surrounding an infringement by Arctic Cat on a Canadian patent.

The patent covers the pyramidal frame and bulkhead (engine cradle) and is owned by BRP. The Canadian Federal Court ruled in favor of Ski-Doo and last spring Arctic Cat was notified by the Court it could not sell any snowmobiles in Canada with the aforementioned pyramidal frame design.

Oh, yes, there’s the small issue of multiple millions of dollars awarded to Ski-Doo for every sled using the design going back to the mid 00’s.

I’ll cut to the chase. As of late last week a press release from Arctic Cat/Textron appeared here at SnowTrax/Supertrax World HQ boldy announcing a deal had been cut and an agreement consummated that will immediately allow Arctic Cat and its Canadian Dealers to resume sales again and deliver ordered sleds to dealers and to foaming-at-the-mouth early-order AC retail customers.

The collective sigh of relief emanating from Arctic Cat snowmobile dealers across Canada could be heard all the way to Thief River Falls, Minnesota.

Interestingly, this same situation cropped up a few years back between Arctic Cat USA and BRP. The issue was ruled on in the US judicial system and AC won. We’ve been told BRP’s US patents were not as airtight as the Canadian patents covering the same technology.

As a result Arctic Cat likely assumed it would win the issue in Canada and Ski-Doo likely knew Arctic Cat wouldn’t. Doesn’t matter. The deal has been struck and we couldn’t be happier.

The terms of the settlement are not known to the unwashed general public and media at this time. However, we’ll take a little stab here regarding an item that Arctic Cat has and BRP might just want.

A little bird (not a Cat) told us this story. It’s no deep, dark secret Ski-Doo may have looked at bringing its European Lynx snowmobiles to the North American market. A big clue was this: Arctic Cat refreshed its North American Lynx trademark just a few years ago. After many years of being moth-balled, the company even offered a domestic Lynx model to draw a line in the snow.

We gotta think when AC heard SD was sniffing around North America evaluating a Lynx introduction on this side of the pond, Cat’s legal counsel got a phone call to made sure it had boiler plate rights to the Lynx handle.

That’s how stuff in the sno-mo-biz works.

There have been lots of deals cut going back 25 years on licensed technology owned by the four OEMs. We wouldn’t be shocked to find out sometime in the future the Lynx trademark got thrown into the settlement between these two manufacturers.

In the meantime its good to know Arctic Cat can do biz in the Canadian market again and these two respected powersport OEMs can stop throwing copious amounts of jing at this contentious, energy and resource depleting confrontation.

Mark Lester
Mark Lester is Co-Publisher of SUPERTRAX Magazine and a regular Host on Dirt Trax TV.
Previous article5-STAR SLEDDING IN CHARLEVOIX
Next articleWILL POLARIS EVER RACE ITS NEW 650?