ROGER SKIME – THE GODFATHER OF CAT 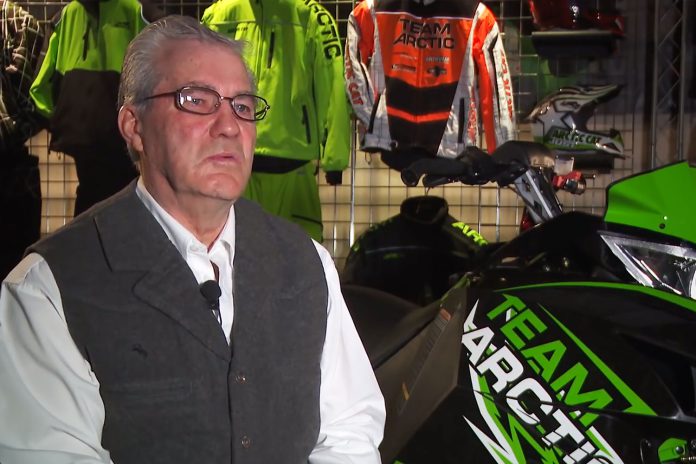 All four current snowmobile manufacturers have a unique story to tell – much of it embedded in racing and the application of technology that worked on the track adapted to production sleds.

Names like Hetteen, Johnson, Takada, Houle, Bombardier and Beaudoin instantly recollect memories of inventiveness and design pioneering reaching as far back as the 1950s. Something new and revolutionary was created in those days – and those men made it work! We owe then a great debt.

Another name synonymous with snowmobiling is Roger Skime. Roger is still around today, very busy working at his second career, ranching. He recently retired after a long and prosperous career with Arctic Cat and just a few weeks ago there was a party in Thief River Falls for him celebrating his many years of influence on snowmobiling. I’ve had the pleasure of knowing Roger for over 30 years and both my brother Mark and I, have nothing but respect and awe for him.

In 1962 Roger was a wet-behind-the-ears young engineering student who ventured into an Arctic Cat warehouse one day and simply picked up the tools to lend a hand helping Edgar Hetteen nail together wooden snowmobile crates for shipping. He was looking for a job, said he would be willing to do anything and was promptly hired. He didn’t last long building crates.

Roger quickly moved through the plant learning various jobs on the line and soon became a self-confessed snowmobile “nut”, constantly dreaming new ideas and concepts to make the vehicles lighter and more efficient. When he wasn’t thinking about snowmobiles he was out riding them, all the while figuring out new ways to make them function better on snow.

This passionate drive for innovation and improvement became Roger’s calling card. His ideas were not only heeded at Arctic Cat but deeply respected by the people who worked with him – even by the competition.

The fact is, at first, Roger didn’t get hired as an engineer but it soon became obvious his greatest contribution would be in that field. His experience working on the line on conveyor systems gave him the idea to allow snow to become a lubricant thus eliminating the need for bogey wheels in the suspension. Roger invented the slide-rail skidframe and although that one was a hallmark, he developed a menu of other innovations over his many years at Cat.

Roger never dreamed up an idea he wasn’t willing to try out himself. There was no CAD-CAM in those days, just trial and error – and although he took advantage of tech advancements and modern digital engineering tools later in his career, he still rode – a lot – and was never satisfied with an innovation he didn’t personally think “would make that sled a better snowmobile”.

I clearly remember one day, sometime in the early 2000s, being at an Arctic Cat intro near Thief River Falls. The press was standing around a Cat trailer waiting for the next event. Suddenly an agile looking rider came across the snow covered parking lot where the sleds were staged, driving what appeared to be way too fast. At the last second, the rider calmly slid the sled sideways and landed it perfectly parallel in a line of precious, one-off prototype sleds standing waiting for our approval.

We looked at each other wondering if this renegade test rider would get called out for being so reckless. He took off his helmet and, you guessed it, it was Roger. He was probably close to his sixties but he could ride like 20-year-old snocross racer. He came over to greet us and told us how he had just figured out something about the sled that was bugging him and knew how to fix it now.

That was Roger. We’ll miss seeing him at Arctic Cat events and getting his inimitable feedback on the industry. We’re glad he’s got a little less on his plate these days but snowmobiling is so much poorer with his retirement.

Kent Lester
Kent Lester is Co-Publisher of SUPERTRAX Magazine and a regular contributor to this website.
Previous article2020 Enduro 900 ACE Turbo Test Ride Preview
Next articleWHAT’S NEXT FOR YAMAHA?