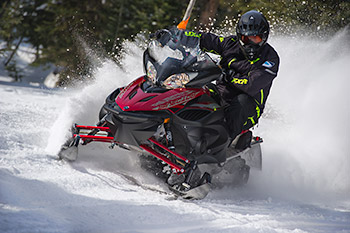 Certainly Yamaha has made good use of a good thing. That good thing we’re talking about is the 1049cc triple used in the Vector, Venture, Viper and in 7000-Series Arctic Cats.

The basic Vector chassis hasn’t seen a tremendous change since it was introduced in 2003. However, moving it to a rider-forward configuration a few years later (2006) amped up its appeal and sustained its viability as a very good trail sled.

Certainly, the intro of the Viper two years ago overshadowed the Vector and we even felt it may be the end of the road for it in 2016.

Yamaha surprised us with some major changes for next year and, after riding it in February, we think the all-Japanese model may have more life in it.

Two differences are the intro of an all-new skidframe in two sizes – 129 and 146-inches and a new electronic throttle control system called YCCT.

First, the throttle. This electronic control differs from Ski-Doo’s handlebar mounted system in that the servo is located under the hood on the throttle bodies.

A cable runs from the handlebar flipper to the servo and it makes the whole thing seem completely seamless. If no one told you it was there, you’d never be aware of it. There are three driving modes with this set-up and you toggle them from the speedometer.

The new SingleShot skidframe is up to 10-lbs lighter than the former Monoshock setup and works at least as well, if not better. It’s particularly good in stutters and chop at low and medium speeds and we found it resisted bottoming very well at higher end speeds.

This skid uses plastic coupler blocks and if we had a choice we’d go for the 146. Even on tight trails we found the 146 Vector turned-in well with the extra track length and the bonus of more floatation is really tempting on a sled that tends to be a bit more obese than the Viper. As it is, the 129’s performance is still very good and there is a weight saving with the shorter track.

The Vector’s riding position seems a bit outdated and our taller riders were complaining about its ergonomics. However, riders about 5’9″ and less were happy with the layout and when riding it, felt the changes this year were truly noticeable.

The LE version of the Veck comes with Yamaha’s performance damper system and it’s about the smoothest sled you’ll ever ride. Engine mods this year don’t necessarily produce more power but we felt this version was plenty fast and the kind of sled you could ride on a long trip and be very happy with.