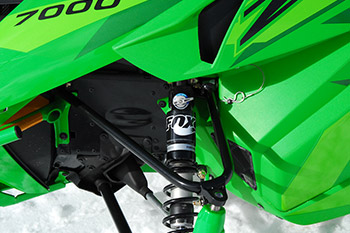 There was a lot of new technology at Snow Shoot (the industry’s 2016 new model introduction to the press) held in West Yellowstone, Montana earlier this month. One we really took to was Fox’s Quick Switch/3 Position shocks available on a number of models for 2016.

We suspect there’s been behind-the-scenes hanky-panky with these shocks.

First, lets say this – every sled these dampers appeared on impressed the entire Supertrax/Snowtrax crew.

On all the Arctic Cat ZR Limiteds (and El Tigre) these shocks did not just improve ride quality they tangibly altered the way the ProCross chassis handles terrain.

The simplicity of their adjustability and their range of adjustment in just three clicks was doggone impressive.

The shocks did the same thing (but not quite as profoundly) on Yamaha’s Viper models using QS-3’s. Why not quite as impressive? We suspect Yamaha did not go as far as Cat with front arm and rear torsion spring recalibration (read: softer).

Finally, in a surprise move, the QS-3s showed up on Polaris’s 2016 AXYS 800 Adventure including a special QS-3 variant with an air chamber and a Schraeder valve and manual pump to add more spring to the rear arm when an optional passenger seat is added.

The plot thickens. At the Polaris Sneak Peek event in early January we were told (but did not see the AXYS Adventure 800) the sled would come with a unique rear arm Fox air assisted shock. Not a mention was made of the QS-3 name or that the front arm and both front ski shocks would be QS-3s.

Why do we mention this? We had heard rumblings Arctic Cat worked a cooperative program with Fox to bring these new shocks to market on an exclusive-use basis.

Suffice it to say there were no smiles in the Cat camp when this topic was raised. We have a strong suspicion this ain’t over.

Some of our more seasoned readers (read: older) will remember in 1997 Fox got themselves in a pickle with Arctic Cat by selling Cat’s proprietary “Remote Front Arm Adjuster” shock system to Polaris.

An ensuing legal battle resulted in the recall of all those shocks from 1997 model year Polaris XCR 440SP race sleds. Stay tuned.