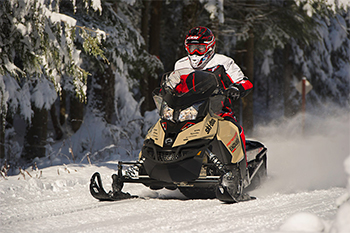 We’re a bit surprised at some of our readers’ and viewers’ feedback after reading about Ski-Doo’s new Renegade Enduro.

In our opinion, this was one of the best 2016 models offered by Ski-Doo and our SnowTrax and Supertrax test riders pretty much universally agreed it was a great move to upgrade to this more macho version of what was once the GSX.

Some of you commented this was just a camouflage job and the Enduro was really not much different sled than the GSX.

In some ways this is true but as BRP says: “The proof is in the riding”. To be fair, the Enduro does use an air shock system like the GSX did in its rMotion skidframe and has a 137-inch track, also like the GSX. However some key changes give this sled a completely different flavor than its predecessor.

First, the Enduro uses a new version of the XS bodywork that is only differentiated from an MX-Z by its flared side panels.

From the outside you can barely tell the difference styling-wise, but it provides better wind resistance than an XS and apparently, even though it is narrower than the XR was, combined with the mid-height windshield, the shelter factor is about the same for the rider.

The Enduro comes with Ski-doo’s new TS adjustable skis, where you simply dial in more carbide to suit trail conditions and an Ice Ripper with carbide tipped studs built into the track) track which vastly improves acceleration and grip.

Since we first rode the Enduro a month ago Ski-Doo has added electronic reverse instead of manual and the Enduro is now offered in two colors: the camo-military beige (our preference) and now, jet black.

We put the most miles on versions of this sled with the 1170 4-TEC and the 800 E-TEC 2-stroke. Although our first choice is the 800, we were impressed with the 4-TEC and its new ITC intelligent throttle control set-up.

There is some varied opinion on ITC around here but the bottom line is it improves the throttle lag situation a little and makes it much easier to move the sled around in tight situations such as putting it on a trailer or parking it in a garage (we’ve found it’s easiest to just flip the switch onto ECO when you’re maneuvering in tight spaces at low speeds).

With the extra grip of a pre-studded 137 and that 800 mill, you can rock this sled on all kinds of trails and the ski combo, along with rMotion, means the handling is flat-out excellent. Best of all is the adjustable air-ride which is simply and absolutely premium.

We’ll go on record as saying we love this sled and think it deserves to be a big success.