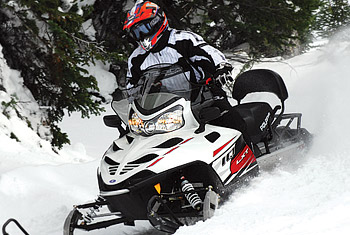 We’ve been waiting for what seems like forever for Polaris to update the chassis on its entry-level 2-upper. Formerly it was based on the long-forgotten Edge platform with front trailing arms (remember those?).

The simple fact was, the old 550 Touring 2-upper was a pretty good sled for its intended purpose: That is, to be a low cost sled that first time buyers can purchase cheap or rental agencies can buy en masse to rent out to newbies.

This new IQ LXT changes the rules somewhat and takes advantage of one of Polaris’ strongest assets. First, it’s not only a better looking snowmobile, but the handling and overall cachet of the sled has gone up about ten notches.

We’re big fans of the IQ platform and although it now plays second fiddle to the new, glued together Pro-Ride chassis, we can’t help but lament the fact that such a great handling chassis with near-perfect ergonomics is fading from front row center.

We rode the LXT 550 last March and were very impressed with it. Its 550 fan-cooled, cylinder reed 2-stroke is a great match for the IQ layout and it’s been a stellar success the last two years in its single passenger iteration, the 550 Shift.

This twin carbed mill is a willing responder with two people onboard and despite the extra noise all 2-stroke fan engines emit, it powers down trails very nicely. Of course, the IQ chassis is responsible for all the positive feedback to its driver and the non-parallel A-arm front end is still one of the best handling setups in the business.

The LXT uses a 136-inch track with one-inch lugs and Ryde FX MPV IFP gas shocks in both the front suspension and the skid frame save the front skid shock, which has a Ryde FX gas cell unit.

There’s 14 inches of suspension travel here – about two inches less than the Grand Touring Sport – but it’s sufficiently plush to protect both rider and passenger from trail junk.

Of special note is the king sized gas tank on the LXT; at 12.25 US gallons (47 liters), it’s about 15-percent larger than any competitor.

This is a big deal when it comes to cruising range – nothing worse than having to hunt down off-trail gas pumps when you’re focused on a destination.

Staff Report
Previous articleWhat Sled Do You Think?
Next articleRIDE WITH CHRIS BURANDT THIS SEASON!