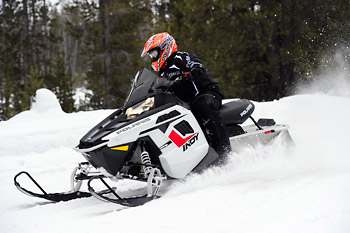 One of the reasons our expectations for fan coolers has been fairly low is due to the less than nosebleed velocities a 60-hp mill can produce.

Here’s the good news: Depending on how you equip your new Indy 550 (Adventure, Voyager, Indy LXT or Indy121) there’s as much as 50 pounds less weight carried.

There’s almost 30 pounds shaved from an IQ to a 121 Pro-Ride and it comes from the lightweight but much stronger cast bulkhead.

There are few rivets on the new Pro Ride chassis and there’s been an elimination of tons of stampings, braces and gussets from the use of a very sturdy clamshell bulkhead.

Obviously the weight savings are not realized in the rear of the Pro Ride 550. The skid and the tunnel appear nearly identical to the IQ 550. Don’t forget, Polaris uses its proprietary bonding system when assembling and this saves significant weight as well.

This familiar 60-horse twin has been around the Polaris parts book since the mid-1990’s. It’s a strong fan cooler but it wasn’t until it was inserted in the Pro-Ride that it impressed our pilots this much.

Frankly, the 121-inch tracked Indy 550 is a little rocket. From first squeeze the sled launches with authority shifting hard up to an indicated 75-mph top end.

The sled feels like a feather and you can throw it into turns with abandon knowing the front end will bite without a hint of understeer.

In bumps there’s no denying this chassis is happy with its light engine. The CVT Tech/PowerBloc primary is an uber-simple clutch that works exceptionally well here.

The new 550 uses a slightly laid back handlepole in comparison to its siblings. This more laid-back handlebar location is beneficial in the Voyageur and the Adventure models targeted at the utility, fur-hat crowd.

Ride quality is decent for this price range understanding those are pretty basic gas cell shocks all around. Again the sled’s inherent lightness gives a noticeably “athletic” feel to the 550.

Here’s the deal. Ski-Doo literally owns the utility snowmobile market with sales greater than all its competitors combined.

This assault (cough) into Ski-Doo’s turf with the new Indy Voyager and the Adventure along with the Indy LXT is going to be successful – guaranteed.

By just getting into this segment with credible product, Polaris will capture sales by being the alternative.

We think Polaris won’t be able to build enough 550’s this season for that reason alone.