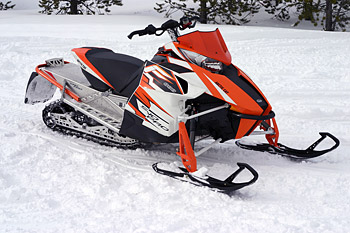 We got our first riding in the week before Christmas and wanted to give you a report on some of our earliest impressions.

The snow was only about six to eight inches deep but the ground was nicely frozen underneath. We rode some rough ditch trails and then hooked up with an ungroomed, frozen rail-line for about sixty miles.

We were apprehensive about the Sno-Pro 800 because we thought it rode fairly stiff last year. Cat had told us it had re-calibrated the front and rear suspensions on the Sno-Pro ProCrossers this year and we had high hopes. Glad to report, we were not at all disappointed.

In fact, we were very impressed. Not only has the skidframe’s compliance been taken up a big notch this year but the front end’s air shocks soak up trail chatter and medium sized bumps much better than in the past.

Barely any kind of roughness comes up through the handlebars. Without question we’d call this the best version of the Sno-Pro ever.

Although this writer hasn’t had a chance to ride a 2013 LXR this year, one of our Supertrax editors has over 100 miles on one.

He claims the LXR (always our fave in the past) has also been softened a bit but without risk of bottoming in the big stuff. This is real progress and means rising rate sleds like the RUSH and the Ski-Doo rMotion have got some formidable competition from Cat.

We also felt the 800’s clutching was much better this year compared to last. There’s no surging forward, the sled engages much more smoothly and the old “4-barrel carb” effect as the engine spools-up into its power is absent. The electric start feature works nicely and has an override on the switch so you can’t cycle the starter motor too long.

We were also impressed with the ProCross Cat’s brakes. It feels like you’re getting everything that was promised last year now and this one-finger deal is so linear, smooth and predictable, we love it.

The 2013 version of the Sno-Pro is a flat-out better sled than the 2012 and it only takes a minute ro realize it.

We’re giving a big tip of the hat to the product people on Brian Dick’s team for smoothing off the rough edges and making this sled all it can be. Congratulations!