POSSIBILITY OF A CONSUMER G4 600 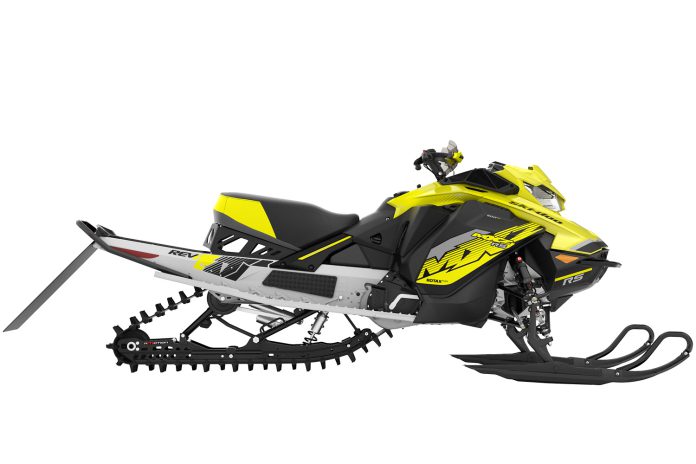 We’ve been stoking rumors of an all-new 600 from Ski-Doo ever since we laid orbs on the 850.

It just makes sense Ski-Doo would utilize its very advanced G4 platform for more of its models and, if this year is any indication, the company has already swapped out sleds like the Renegade Backcountry, the Freeride and others into the new chassis.

We think Ski-Doo and Rotax have been holding off a couple of years on the development and certification of yet another new E-TEC for the G4 – and that would be a 600-class powerplant.

With the recent debut of Ski-Doo’s 600cc snocrosser, the MXZ X 600 RS, there are some clues about what a new 600 would look like.

The RS, essentially a racing-only sled and engine, has a number of new tricks not used before in the old XS-based RS. First, the RS’s 600 (599.4cc) uses 850-inspired booster injectors, double reed valves and a shorter intake length (this gives the engine incredible throttle response and “snap” when you tip-in the throttle).

Also, this new 600 is a mono-block – much lighter – and has redesigned RAVE exhaust valves very similar to the 850.

We haven’t heard whether the 600 uses the flat stator and narrower width of the 850, but if it didn’t, it would be considerably harder to shoehorn it into the narrow G4 bulkhead.

We’re presuming this mono block is an-all-new casting along the lines of the 850 and will certainly accommodate the narrowness of the chassis.

All these changes are a pretty big investment and give clues to the fact there’s a new consumer 600 coming.

One question: Will it be a 600 or a 650? Although we made guesses about the 850, we never expected Ski-Doo to punch out the 800 to bigger displacement.

It changed all the rules and the company might be doing it again in the 600 class.